Spruce spider mites are being found on Douglas fir, a species typically not infested with this mite. Check all Christmas tree species and consider that mild temperatures this summer may lead to mite populations building earlier than usual going into fall.

As unseasonably cooler weather continues and populations build, growers should be ramping up their mite scouting programs. Populations may be larger and build earlier than in most seasons because the hot weather that typically limits activity in the summer was short-lived this year. To scout for spruce spider mites, growers should sample multiple trees in each plantation and be sure to select trees from different elevations as well as from the interior and exterior rows of plantings. Larger tree samples will increase grower accuracy in their assessment of the population and potential risk. Scouting should be done on a season-long basis and not only after symptoms appear as this is often too late for effective treatment. The simplest way to scout for adult and juvenile mites is to shake or tap a branch over a scouting board or piece of paper.

The spruce spider mite egg is a tiny, bright red sphere with a single hair in the center; eggs that have already hatched will appear clear (Photo 1). Spruce spider mites are very small and soft-bodied during the motile stages. Adult spruce spider mites are one solid color, elliptical in shape and have hairs along the top of the abdomen. Coloration varies and is not a good indicator of identity for the motile life stages. Beneficial predatory mites can be distinguished from pest mites by observing their movement. When disturbed, adult predatory mites generally move quicker than pest mites and can be observed moving speedily around on scouting boards.

Symptoms of damage include chlorosis, needle drop and tree mortality. When viewing damage through a hand lens, symptoms appear as small, yellow, circular patches that surround the feeding sites (Photo 2). Spruce spider mite damage can be prevented through a combination of careful monitoring, resistance management and the utilization of pesticides that are less harmful to natural predatory mites. The simplest way to determine the need for management is to evaluate if scouting indicates that the population is growing or at a damaging level. It is important to remember that spruce spider mite populations can fluctuate rapidly, so simply observing damage on trees is not an accurate indicator of the need for treatment as damage may have been caused by populations that have since died off, making a spray application pointless. 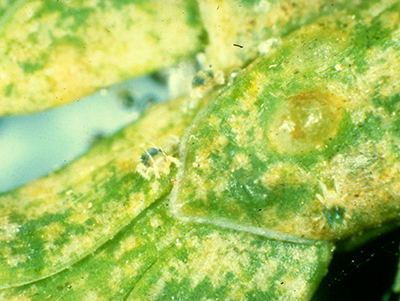