Squash bugs as pests of cucurbits in Michigan

Squash bug is a pest of cucurbits that show up as isolated hotspots in certain fields.

Cucurbits in Michigan are vulnerable to squash bug damage throughout the growing season. Squash bugs prefer pumpkin and squash, but will feed on other cucurbits like cucumber and watermelon. Squash bug juveniles and adults can cause significant damage to foliage and fruits.

Squash bugs lay clusters of 10-20 eggs on the surface or underside of leaves between leaf veins, or on the stem (Fig 1A). Eggs are small, oblong, and a shiny copper color. Upon hatching, nymphs are green with red legs and antennae, which turn black within hours (Fig 1B).

As nymphs mature their bodies become gray (Fig 2A). Adults are flat-bodied, about 5/8 inch long, black and brown with light and dark stripes along the side (Fig 2B). Nymphs will often be seen clustered together, while adults are found singly or in mating pairs. Adults can fly but generally walk on the ground between plants, where they are well-camouflaged. 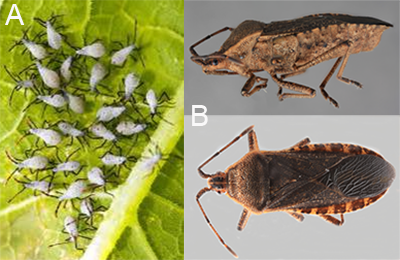 Adults overwinter indoors or in leaf litter or field debris, and emerge in April or May to lay eggs. Nymphs hatch within 10 days and begin to feed, reaching adult stage in 35-40 days. Squash bugs have one generation per year in Michigan, but all life stages can be observed at any time of the season.

The horned squash bug feeds on cucurbits, but is less damaging than the squash bug. Horned squash bugs have more prominent spines on the head. Similar herbivorous insects include leaf-footed bugs (Fig 3), which are less likely to cause serious damage to cucurbits than squash bugs. 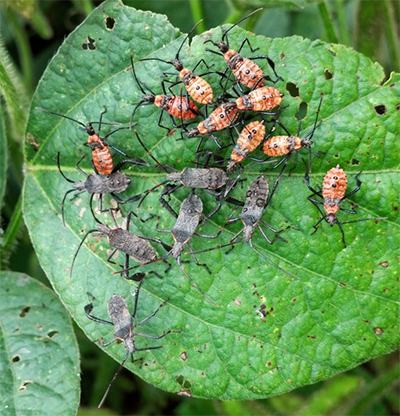 Figure 3. Other insects, like leaf-footed bugs, may appear similar to squash bugs but are an not economically important pest of cucurbits. Photo credit: P.L. Coffey 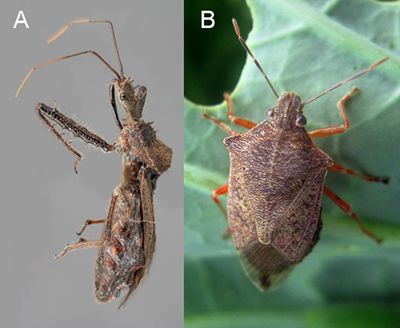 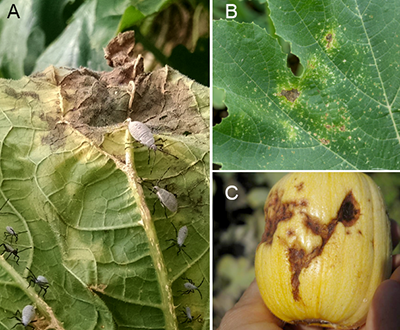 Visual scouting for all life stages of squash bugs should occur from June to September. Insecticides are most effective on young squash bug nymphs (Fig 1B) compared to other life stages.

Download tip sheet version of this article: Squash bugs as pests of cucurbits in Michigan