Norm Myers, Oceana County CED, sent in some very attractive beetles that a client found hiding in a Frasier fir plantation. Norm’s client noted that the beetles were feeding on some nearby weeds and that some of the weeds had been completely stripped. I recognized the beetle as something that I had seen before, but I couldn’t put a name on them (I had a bit of a senior moment). With a little work, I identified the beetle as Chrysolina quadrigemina (Coleoptera: Chrysomelidae), the so-called St. Johnswort beetle. The beetles are metallic bronze-, blue-, green- or purple-colored and just over 0.25-inch long.

This beetle was brought to the United States in 1944 in the first attempt at controlling weeds with insects. The beetle is a natural enemy of St. Johnswort, Hypericum perforatum, a weed that displaces forage plants in rangelands throughout the temperate regions of the world. In 1943 it was estimated that 400,000 acres of California rangeland were infested with St. Johnswort. 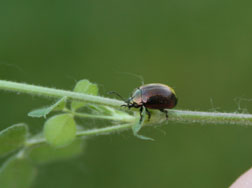 The life cycle of the beetle is very closely synchronized in its growth stages with the host plant. The beetle emerges from pupal cells that are just beneath the soil surface in April and early May when St. Johnswort is producing flower buds or are actually in flower. The beetles feed voraciously on the plant foliage until late June or early July, and then, fully fed, enter an obligate period of rest, called aestivation, under stones or debris and in cracks and crevices in the soil. The beetles become active again when the fall rains begin. This activity coincides with the growth of basal leaves on St. Johnswort. The beetles feed on the leafy growth, mate and lay their eggs about mid-October. Upon hatching the larvae completely devour the plant’s basal growth. Then they enter the soil to a depth of about one inch and each larva forms a cell in which it pupates. There is one generation per year.