In no particular order, here are some of the insects to keep an eye on over the next 7 to 10 days.

On May 20, Bruce MacKellar and I found numerous black cutworm larvae (1/2 to 1 inch, perhaps fourth instar; Photo 1) in mats of chickweed in fields in St. Joseph County. The larvae are likely the result of a flight several weeks ago. Corn stands emerging into a live (Photo 2) or freshly killed (Photo 3) weed mat may face considerable stand loss damage. Rescue treatments are effective if applied in a timely fashion.

In other words, you have to walk fields to know that cutworms are present. Stand loss may not be obvious from the road if seedlings are emerging into weeds. Target weedy fields for scouting as they are at most risk forinfestation. Threshold – 5 percent plants cut. Rescue treatments include products such as Capture, Lorsban, Mustang, Ambush/Pounce, ProAxis, Warrior, Sevin and others.See the Field Crops Insect Control Guide E1582 for a complete product list, insecticide rates and precautions. Note too that the type of Bt toxin in Herculex ECB-protected corn is reasonably effective against black cutworm. 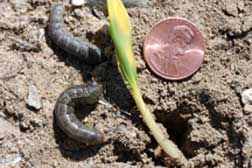 I’m still watching and waiting to see if a significant armyworm infestation develops. Thus far, I have not had any calls about, or personally observed, caterpillars. However, keep an eye on winter wheat fields. Most wheat fields look good so far, and we wouldn’t want to let any of that potential yield go out the back end of a caterpillar.

Growers in southern and central Michigan may cut fields in the next week or two. For weevil control, cutting is preferred to spraying. There is some suggestion that recent increased spraying for weevil is dampening the impact of the wasps that provided biocontrol. We don’t know this for sure, but extension educators have indicated that producers who have sprayed weevil over the last few years seem to have increasing weevil populations. If spraying is necessary, note pre-harvest intervals, which range from 0 to 28 days depending on product, rate and crop use (hay vs forage).If an infested field is cut, scout the new growth carefully. Just six to eight larvae per square foot is the threshold for weevil larvae after cutting. There are many products to choose from, plus spraying the new growth avoids treating flowers (and potentially killing bees) and achieves better coverage.

I am still getting calls about grub infestations. There is little you can do after planting for grubs in a field crop, except hope you have the right kind. Phyllophaga grubs (the big June beetle grubs) pupate and emerge as adults early, but since many June beetles have a multi-year life cycle, only a fraction of the population in a given field may pupate now. The rest remain as hungry larvae. As far as annual grubs, the timing of pupation generally progresses in this order: European chafer, Asiatic garden beetle and Japanese beetle. Chafer feeds later into the fall and earlier in the spring, but usually pupates before the other species. Thus depending on which grub infests a field, a later-planted crop may escape damage because the population pupated.

Granular insecticide or Poncho 1250 > Poncho/ Cruiser 250 (suppression?) > granular or liquid insecticide.Broadcast on the soil surface after planting (good luck with that last one).