In the December 2006 issue, the North Dakota State University extension service publication Tree Talk, authors Jim Walla (forest pathologist) and Kasia Kinzer (plant pest diagnostician), NDSU Department of Plant Pathology, report that a fungus, Stigmina lautii had been discovered on spruce in North Dakota. The article has a short history of the problem and good descriptions of spruce afflicted with problems and photos of the potential pathogen. We have seen this same fungus on blue spruce needles in Michigan for the past few years, but it had not been found often and certainly was not found as abundant as either Rhizosphaera kalkhoffii, a fungal pathogen known to cause Rhizosphaera needle cast disease or Setomelanomma a fungus with an unknown role in diseases of spruce. This summer we began to see more Stigmina on blue spruce than in previous years.

I want to share our 2008 observations with you because this may begin to provide some insights into a new spruce problem and what we may or may not know about it. On this blue spruce plantation in north central Michigan, Rhizosphaera needle cast had been well managed. Well-timed sprays in the spring had suppressed Rhizopshaera to non-detectable levels in the population of trees. However, by mid-summer 2008, it looked as if the trees had a needle cast disease on the lower branches. The casting needles were year two and year three needles. Current year needles were not affected. The second and third year needles were turning purple or brown, dying and dropping off the stems. These needles had a black fruiting body replacing the white wax plugs similar to Rhizosphaera under observation with a hand lens. Under the higher magnification in the lab, the fruiting bodies were obviously not Rhizosphaera, but Stigmina. This was the largest amount of Stigmina on blue spruce we have seen in the state. While we do not know much about Stigmina, we now know that what controls Rhizosphaera does not control Stigmina because either the fungicide could not handle Stigmina, or the timing of the fungicide was not appropriate for Stigmina. If you have been spraying with chlorothalonil-based fungicides and not finding acceptable control of your blue spruce needle cast problems, you may not have Rhizosphaera needle cast, it might be Stigmina. 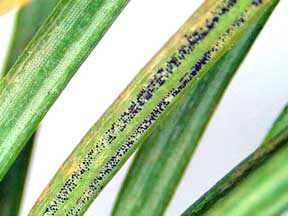 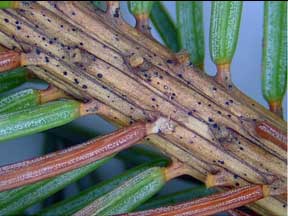 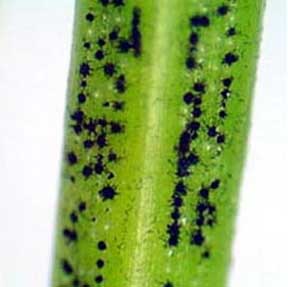 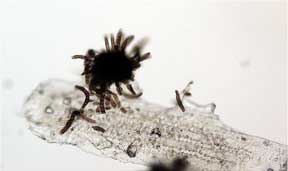 Figure 4. Close up of Stigmina sporodochium.