Is closer nitrogen placement to the plant the key to improving corn grain yield?

Greater emphasis has been placed on applying nitrogen (N) closer to peak uptake periods in a more efficient manner thus improving corn nitrogen recovery and reducing the risk for nitrogen loss. Although few yield benefits to delayed timings of nitrogen application have been observed in this region, greater flexibility may exist with mid-season nitrogen placement strategies. New technologies have been developed to increase application efficiency by applying nitrogen more quickly and placing N closer to the plant. Instead of conventional coulter-inject sidedress nitrogen placement located 15 inches from the corn row, Y-drop application can place nitrogen adjacent to or in the vicinity of the growing plant.

Within each strategy, sidedress nitrogen methods included traditional coulter-inject and Y-drop applications. Sidedress applications were made June 6, 2017, in Richville and June 9, 2017, in Lansing with grain yield adjusted to 15.5 percent moisture. 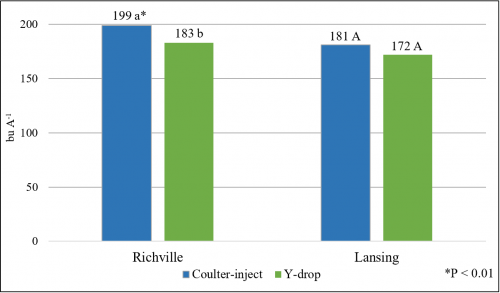 Figure 2. Corn grain yield as affected by sidedress nitrogen placement, Richville and Lansing, Michigan, 2017. Within each location, mean values followed by the same letter are not significantly different at α = 0.10.

No rainfall events occurred within five to eight days of sidedress application at either location, which may have restricted some degree of nitrogen movement into the root zone. Water is one of four factors along with oxygen, the specific nutrient, and the root itself required to be in the same place at the same time for root nutrient uptake. Daily wetting and drying of surface soils caused by evaporation can limit downward movement of surface-applied nutrient applications into the soil profile.

For additional information on this research trial and others, please visit the MSU Soil Fertility Research website and view our online video updates.

Dr. Steinke’s work is funded in part by MSU’s AgBioResearch.