Straw covers are inexpensive and effective for reducing odors from manure storage structures.

Odors and other gaseous emissions from livestock production (ammonia, hydrogen sulfide, volatile organic compounds) are associated with five different management areas; animals and housing, manure storage, feed and feed storage, mortality handling and land application. Four of the five all contribute to farmstead odors. Up to 50 percent of the odors from a livestock production site may be emitted from the manure storage structure. Therefore farms with exterior manure storages have the opportunity to reduce farmstead odors by implementing manure storage odor mitigation practices. Straw covers are an inexpensive practice for controlling the odor and other emissions from exterior manure storages structures.

The original depth of the straw cover impacts its effectiveness. Another Minnesota study reported a 63%, 78% and 83% odor reduction from straw covers when applied at depths of 3.9, 7.9 and 11.8 inches, respectively. Eight to 12 inches of straw is recommended as the starting depth of the cover though depth uniformity is a concern depending on the size of the structure. Straw covers are not suitable for large manure storage structures due to the difficulty in establishing and maintaining an even cover.

Straw covers are not a permanent solution. The straw cover needs to be reestablished each year before the weather warms and nearby residents are outside where livestock odors are more noticeable. Straw covers are more effective in dryer climates where there are fewer rain events to disturb the cover. Researchers in Minnesota report that the effectiveness of the straw covers in their trial decreased after several late summer rain events. In regions potentially impacted by summer rains, the effectiveness of straw covers may be improved by establishing the cover in the spring, anytime in May or early June, then adding fresh straw to restore the cover about half way through the summer. 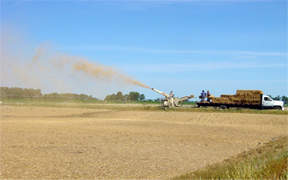 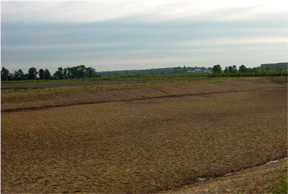 Anytime you add material to a manure storage structure there is an increased concern with manure load out and application. There are no reported difficulties with the straw covers but a chopper pump is required for agitation and load out. Filson et al. reported polytwine is a concern and that operators want to insure all twine is collected while the straw is being applied.

Addressing odor and other gaseous emissions from manure storage structures addresses one of the four management categories where odors are generated on livestock farmsteads. Installing straw covers on exterior storages will not impact the odors from animals and housing, feed and feed storage and mortalities. Depending on the amount of odors generated by these other sources, the straw cover on the manure storage may be effective but the overall odor reduction may be less noticeable. Straw covers on exterior manure storages should be considered one practice in an overall odor reduction plan.

Use caution when dealing with foaming manure pits