Streamline, not shorten, a zoning ordinance

Making a zoning ordinance shorter, or simpler, is an often heard goal by local government officials or planning commissions.  Doing so without full understanding of all that is involved is one of the major causes for really messing up a zoning ordinance.

So much so that one can say “shorter”/”simpler” is just about always a euphemism for a poorly written ordinance that has many ways around its regulations. Zoning is a legal document, and in most cases NEEDS to be written in legalize. If “simplification” is just to get rid of legalize, then one often results in a zoning ordinance which actually does more damage than good. In other words, no zoning may be better.

That is not to say zoning cannot be made more user friendly, easier to understand.  It can be.  To avoid confusion we at Michigan State University Extension have coined the term “streamlining” a zoning ordinance.  The following are two articles on streamlining zoning and MSU Extension offers an evening training program on the topic.

To illustrate the point about “shorter”/”simpler” let’s explore just one point about front yard setbacks.  This is just one of hundreds of possible examples that can provide many ways around its regulations.

A well thought out zoning ordinance will not just say the front yard setback is 30 feet from the property line (that would be the “shorter”/”simpler” version).  It will go into more detail such as “the required front setback is

whichever one places the setback closer to the center of the parcel.”

There are zoning ordinances which include the necessary detail.  For example, the Wexford Joint Planning Commission Ordinance.  That ordinance uses language similar to the example provided above.  Other zoning ordinances may have the same concepts (property line or right of way line or centerline) in the definition of front yard setback. 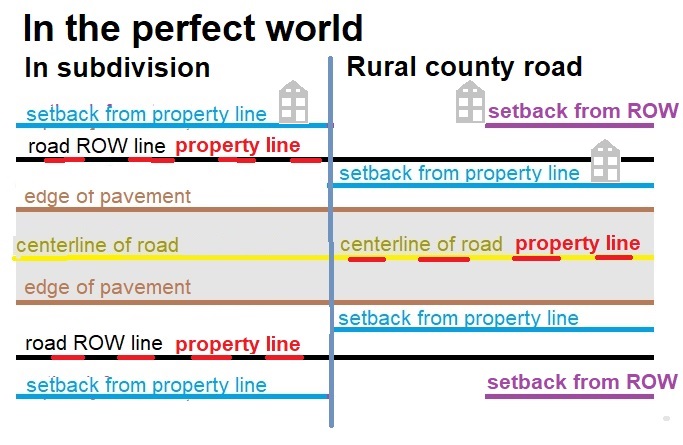 Ordinances that do not go to this detail can create a loophole for the property owner and confusion for those administering the ordinance.  In the first illustration is the ideal, or perfect world situation.  On the left side is a road (or street) in a subdivision.  There is a centerline of the road and the road surface nicely centered within the road right of way.  The right of way width is usually 66 feet wide.  The boundary of the right of way is also the front property line.  In a city or village, it usually works this way with most property in subdivisions.  But not always.

The right side of the illustration shows property that is not in a subdivision, which could be in a city or village, or most commonly in a rural situation.  In the ideal world, right side of first illustration, there is a centerline of the road and the road surface nicely centered within the road right of way.  But there is a big difference.  The road right of way is an easement, a legal right for the road to traverse across one’s land.  The adjacent property owners still own the land under the road.  So in the ideal world the front property line is at the centerline of the road.  That means a 30-foot front yard setback, measured only from the property line, is not even back far enough to be outside of the typical 33 foot road right of way easement.  One probably can’t build within the right of way, but a person may be able to build quite close of the right of way line.

The important missing detail in many zoning ordinances would be to also require a 30-foot setback from a road right of way line or edge of a designated easement to take into account this common circumstance found throughout Michigan.

Roads are not only two lanes wide.  There are wider roads, passing lanes, turning lanes, which may move the centerline of the road to one side of center of the right of way or off the property line.  The setback from the property line may be at or within the road.  Again, this is why clear language indicating a setback from the right of way line is important.

For many reasons a road is not always built in the center of the right of way.  One set of reasons may be to go around something, such as trees to be preserved, a pond or other water.  It may be that the road was built in the wrong spot based on historic use or survey error.  This can be extreme enough that the road goes behind the front setback measured from the property line. In other instances a road right of way and its road bisect someone’s property, so that is nowhere near one’s property lines. The important missing detail in many zoning ordinances would be to also require a setback from the centerline of the road to take into account this common circumstance found throughout Michigan.  For example the intended setback plus half the width of the road right of way (33 feet of right of way plus 30 feet of setback).

Michigan was surveyed in the early to mid-1800s.  Technology was not as precise about 160 years ago.  As a result, there are survey corrections, usually at township lines, where there are two survey corners.  This might be noticed with a road making a sudden jog when it crosses a township line.  Sometimes the jog is minor.  Sometimes it can be major such that one’s property is on both sides of the built road.  The important detail is a setback measured from the centerline of the road.

So it is important, in this example, for the 30 foot front yard setback from the property line to also specify it is 30 feet from the road right of way line, or 63 feet from the centerline of the road or road right of way, whichever one places the setback closer to the center of the parcel.  Front yard setback is just one of many examples where detailed ordinance language should not be sacrificed for the sake of simplicity.

Those in Michigan State University Extension that focus on land use provide various training programs on planning and zoning, which are available to be presented in your county.  Contact your local land use educator for more information. 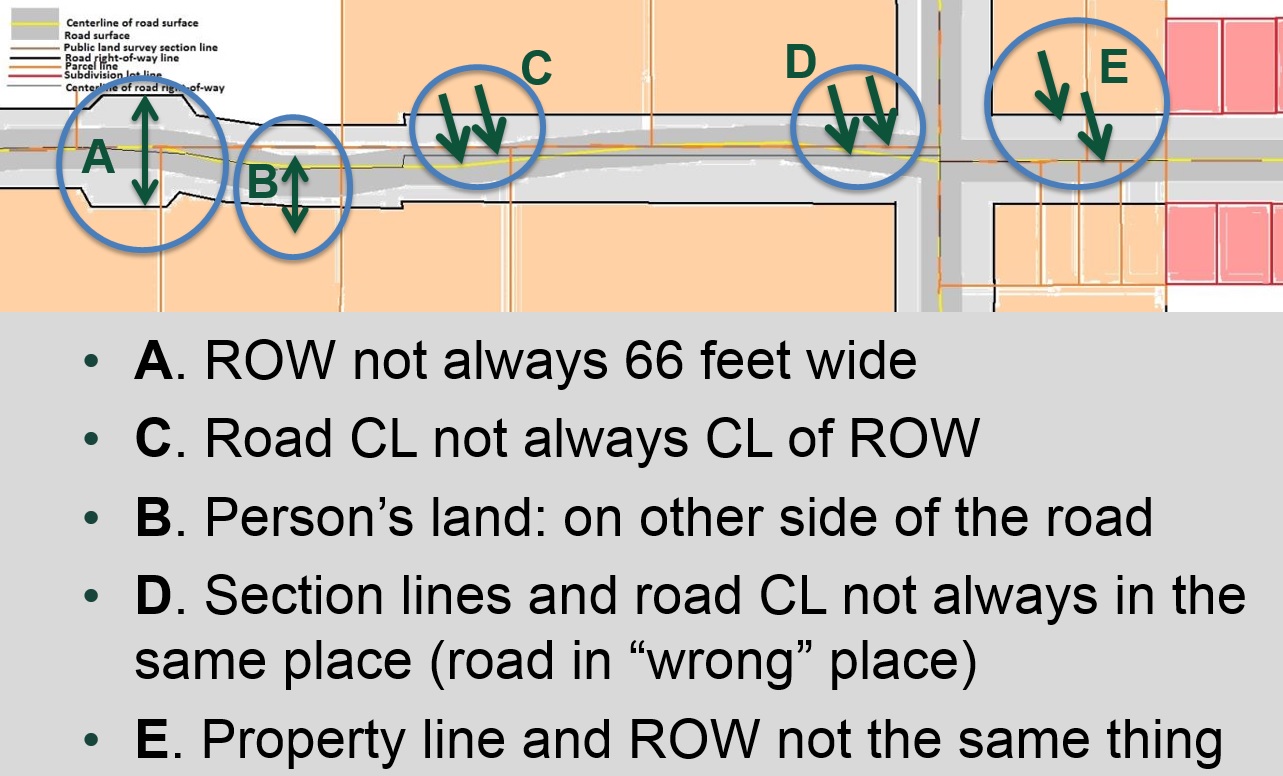