In Pennsylvania, they found most of the scale in Christmas tree farms are actually striped pine scale. After looking at scales this past week, I suspect this is true for Michigan as well. What does this mean…probably nothing to a grower since the biology and control of the two species are quite similar with a single generation each year. Also, there doesn’t appear to be much difference in timing of crawler emergence, which is now in many locations in the lower peninsula. Crawlers are tan to pink and resemble sawdust as they move over the bark. These scales produce lots of honeydew, which is attractive to ants, bees and wasps. This honeydew also supports growth of sooty mold, and heavily infested trees appear to be black. 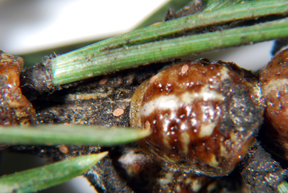 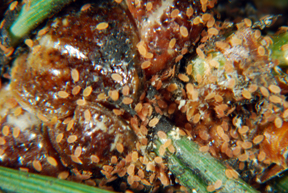