White-tailed deer are among the most beloved creatures on the landscape, prized for the wildness they symbolize and recreational opportunities they provide to sportsmen and women. However, on Michigan farms the relationship between humans and deer is more complicated. In areas with high deer densities, damage to field crops through feeding, trampling and bedding can reduce harvestable yields. In some parts of the state, the presence of deer on farms also represents potential for disease transmission to livestock. Of primary concern is Bovine Tuberculosis (TB).

Research has suggested that crop losses to deer greater than 10-15 percent of the total crop or $20 per acre are viewed as significant and requiring remedy by Michigan producers and hunters (Fritzell et al., 1995). Northeast Lower Michigan has been identified as a region of special concern for white-tailed deer management due to current deer population densities above Michigan Department of Natural Resources’ (DNR) goals, high incidence of crop depredation and the presence of bovine tuberculosis-infected animals in the deer herd. Exclusion research conducted in the region by MSU during 1993-94 recorded an average yield reduction of 5.23 percent in alfalfa and 9.87 percent in kidney beans caused by deer feeding (Braun, 1996).

Soybeans are a favorite food of white-tailed deer, meeting their dietary requirements all season long (Colligan, 2011). Substantial defoliation by deer (67-100 percent) prior to the V6 growth stage can significantly reduce soybean yields (Garrison and Lewis, 1987). On the other hand, mild to moderate damage including apical bud removal has been shown to increase soybean yield in some cases by stimulating additional branching and pod set (Rogerson et al., 2014).

Today, grower reports of soybean yield loss to deer in Northeast Michigan vary greatly. In addition, differences likely exist between real and perceived loss due to deer feeding (Conover and Decker, 1991). Until now, no data on local soybean yield losses to deer had been published, despite increased soybean acreage in the region and significant changes in both crop production systems and deer management policy/behavior in recent decades.

In 2015, MSU Extension, with support from the Michigan Soybean Promotion Committee, measured soybean yield lost to white-tailed deer by constructing and installing exclusion cages in eleven soybean fields across Presque Isle Co. In most cases two fields per farm were selected, identified by growers as most and least susceptible to deer damage (good/bad) based on past pressure, habitat conditions or the perceived ability to implement management practices like harassment or lethal control. In addition to measuring soybean yield reduction, we also set out to evaluate field characteristics that influence deer pressure, particularly field size and edge type (forested, open or developed). Our study fields ranged from 16.3 to 74.5 acres in size with 0-74.8 percent forested edge.

Exclusion cages measuring 6’x6’x5’ were placed randomly in each field shortly after planting. In all fields, six cages were placed along field edges (0-295’ from the edge) where browsing was expected to be concentrated. In larger fields, three additional cages were placed inside of a ‘core’ area (central area, >295’ from field edges) where little browsing was expected. Smaller fields less than 590’ across had no ‘core’ area and received only six cages.

Stand counts and browse ratings were taken inside and outside of each cage (30’ away in a random direction) July 2nd-8th. Our browse ratings included the percentage of plants damaged and percent defoliation of damaged plants. Yield data was collected from the same areas September 25th-Nov. 2nd. Whole plants were harvested and threshed, the seed weighed and tested to correct for moisture content. Yield differences were calculated between protected plots and those open to deer browsing. Correlations between yield loss, browse ratings and field characteristics were also calculated.

The average percentage of plants damaged measured between growth stages V1 and V6 ranged widely from 0 percent in one field to 100 percent in another. The field averages for early season defoliation similarly ranged from 0-87.5 percent. Our exclusion treatment (deer browsing) significantly affected soybean yields (P=0.001). Yield loss at the field scale ranged from 0% to 100 percent in one case, averaging 10 percent or 3.89 bushels per acre across all fields and cages. With about 9,000 acres of soybean planted in Presque Isle Co., we estimate that approximately 35,010 bushels were consumed by deer in 2015 with a farm gate economic impact of -$307,388.

Figure 1. Yields of Soybean in and out of cages 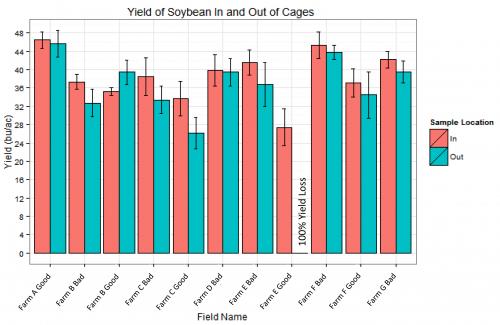 Several tools including regular hunting, special DNR harvest permits and custom harvest by USDA Wildlife Services are available to address crop damage caused by deer. However, all available tools have historically been underused (Fritzell et al., 1997). Out of Season Shooting permits (OOS), Deer Management Assistance permits (DMAP) and Disease Control permits (DCP) have been the principle tools available to producers demonstrating significant losses. A total of 525 special permits were issued to Presque Isle Co. producers by the DNR in 2014, but only 185 deer were harvested with these permits. Only 53 percent of deer harvested in Presque Isle Co. during regular hunting seasons in 2014 were antlerless deer, despite extremely liberal antlerless quotas established by the DNR.

Several barriers to successful implementation of such management tools include the limited availability of hunters, disinterest in harvesting female deer and the sometimes negative feedback from neighbors and landlords that producers receive when implementing controls (Fritzell et al., 1997).

In 2016, MSU Extension will partner with local producers to trial field edge plantings of sacrificial crops as a strategy for reducing damage to soybean cash crops planted in the remainder of a field.

Do you have a plan to reduce risks from wildlife in your produce fields?

Make an effort to keep wildlife out of vegetable fields