Here in Michigan, there have been observations of yellowish-wheat this spring that may have been a temporary sulfur deficiency until the soils warmed and adequate sulfur was mineralized from the soil organic matter and crop residues.

The question being asked around the North Central Region is whether sulfur deficiency is becoming more common. Responses from soil fertility specialists from some of the North Central states indicate that sulfur deficiencies are occurring in localized spots more frequently. This is to be expected since sulfur depositions have continued to decrease as industrial smokestack emissions have been cleaned up. Here in Michigan, there have been observations of yellowish-wheat (one of the more sulfur sensitive crops) this spring that may have been a temporary sulfur deficiency until the soils warmed and adequate sulfur was mineralized from the soil organic matter and crop residues.

Sulfur deficiency may also be affecting first cutting alfalfa growing on low organic matter sandy soils. Bright yellow stripping of the leaves of corn is the indication of sulfur deficiency (see photo). Sulfur deficiencies are most likely to occur on low organic matter sandy soils. Leaves of corn in this picture had a sulfur concentration of 0.12 percent compared to 0.21 percent in adjacent good corn. With the excess rain that has been occurring in many areas, sulfur could very well have been leached out of the root zone in low organic matter loamy sand and coarse sand soils. In some situations, these soils also have a pH in the mid- to low 5’s with marginal magnesium levels. In these situations, spraying the affected corn with 20 lbs magnesium sulfate (Epsom salts) per acre (supplies 2.1 lbs Mg and 2.8 lbs S/a) in about 30 gallons water per acre will improve plant growth. To better document the occurrence of potential sulfur deficiencies, it is important that farmers, consultants and educators collect leaf tissues for analysis of sulfur and other essential elements. 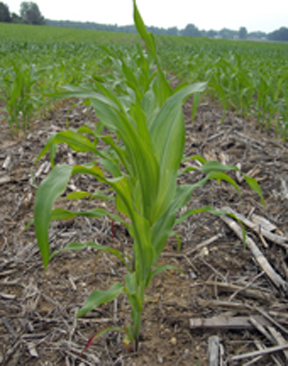 Moving the Needle on Soil Health

Cover Crops as Forage: What to Consider