Regional rainfall beginning in March accumulated 19.5 inches and was relatively consistent across the Upper Peninsula. This is a change from last year when regional rainfalls ranged from 12 inches in Stephenson, Michigan, to 16.27 inches in Escanaba, Michigan. Rainfall averages were low in July, resulting in drought-stressed crops. Half of the regional rainfall accumulated in August, September and October, making for a wet fall.

Warmer temperatures occurred this season, especially from July on (see graph). Regional GDD accumulations since March 1 totaled 3,464 base 42 degrees Fahrenheit; 2,967 base 45 F; and 2,193 base 50 F. The region gained two weeks in heat accumulation compared to previous years. The exception was the western part of Iron County, which was one to two weeks behind the area’s average. Temperatures as of Oct. 14 reached below freezing at night according to the regional Michigan State University Enviro-weather stations located at Chatham, Escanaba, Newberry and Stephenson. 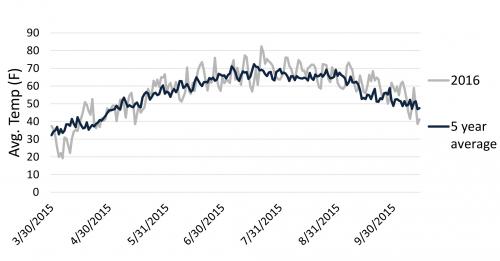 Corn yields were above average with the highest reported yield of 218 bushels per acre in Stephenson (Menominee County). Some stalk rot and lodging issues were reported. Corn silage averaged 15-18 tons per acre. Silage is just finishing up, but plenty of corn still stands in the fields.

Half-way through dry bean harvest, it seems the effect of weather is showing. Dry bean yields were projected to be exceptional, but the July drought caused a significant blossom drop. Things are looking average to slightly below, but quality issues like immature beans and mold have been reported. Dark red beans are currently being harvested at 19-22 percent moisture with yields ranging from 10-15 bags per acre. Black beans are averaging 12-13 bags per acre, down from previous yields of 20 bags per acre. Weed pressure seemed to be an issue this year, with nightshade and giant ragweed being more prevalent. 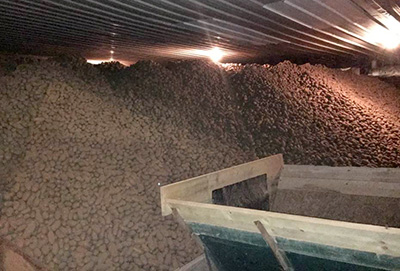 With the exception of some hail damage, potato yields were good this year. White rounds averaged 300 hundred weight with some skinning issues reported. Norkotah yields ranged 400-500 hundred weight. Harvest time was about one to two weeks earlier than normal, finishing up last week.