The drastic swings in temperature over the last several weeks have growers questioning what effect temperature has on weed control from burndown herbicide applications.

Figure 1. Control of common chickweed at air temperatures ranging from 47 to 87°F 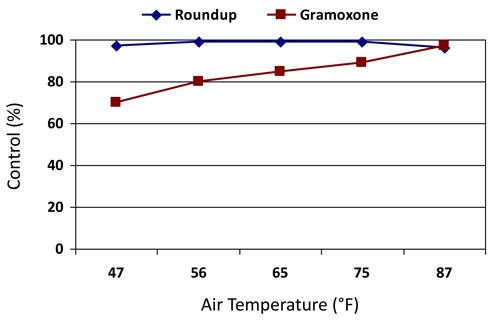 We also found out that there was more of a temperature response with both glyphosate and Gramoxone for henbit control (Figure 2), which is a much tougher weed to control with either herbicide alone.

Figure 2. Control of henbit at air temperatures ranging from 47 to 87°F 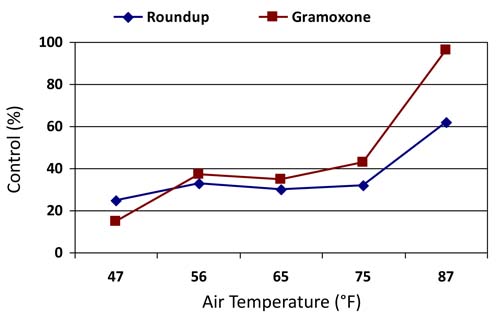 Overall, increases in air temperature significantly enhanced weed control and reduced weed biomass. The treatment that was least affected by temperature was the burndown herbicide that was tank-mixed with a soil-applied herbicide with residual activity (data not shown). Weed control provided by this treatment at lower temperatures may have come from the residual activity of that herbicide. Remember, the addition of a soil-applied residual herbicide will also have several benefits including reduced in-season weed growth, extending early-season weed control, improving control of problematic weeds, and providing a proactive approach to managing glyphosate-resistant weeds.

So when deciding whether it is too cold to spray, make sure to consider what weeds are in your field and the benefits to including a residual herbicide.

The 4R's of Nutrient Management