Conditions are welcoming for stem nematodes in landscape plants this spring. Take preventative measures as no post-plant nematicides exist.

Migrations of many animals have been well documented and are often referred to as great or remarkable. The “great” migration of the wildebeest from the Serengeti plains in East Africa to Kenya is an example, another being the “remarkable” migration of the monarch butterfly from northern climates to Mexico to spend the winter. However, an animal much smaller than either of those makes its own migration every spring in Michigan and synonyms of great are not used to describe it. The animal to which I’m referring is the stem nematode, Ditylenchus dipsaci. This annual migration occurs without much fan fare; no tourists will flock to observe it. But growers, especially of some vegetables and many landscape plants, should take heed of this annual event.

Stem nematodes overwinter as fourth-stage juveniles and adults in plant tissue or soil. When moisture is adequate, untold numbers of stem nematodes migrate from their overwintering sites onto the stems and leaves of young plants. Maximum activity of these nematodes coincides with the principal growing periods of most hosts, especially annual ones. Females will produce as many as 500 eggs and can live 10 weeks or longer. The life cycle can be completed in three weeks in optimal conditions. These nematodes are very active early in the spring and the production of eggs can commence at temperatures less than 40°F

Symptoms caused by stem nematode infections vary depending on the plant species attacked. Plants propagated by bulbs, corms and tubers are very susceptible to D. dipsaci.Phlox subulata, is very susceptible to stem nematodes and always should be monitored very closely. Severely infested plants often have a hollow appearance, like they are being eaten from the inside out. This species has a very wide range, attacking roughly 500 plant species including many herbaceous perennials. Creeping phlox, 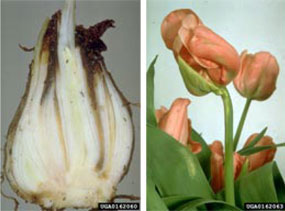 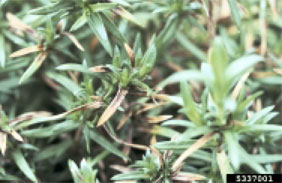 Similar to most species of plant-parasitic nematodes, control is difficult to achieve once stem nematodes are established within their hosts. Growers of landscape plants should take steps to avoid these nematodes. This is primarily accomplished by propagating nematode-free plant material and exercising good weed control because many weeds serve as hosts. On sites infested with D. dipsaci, using clean fallow is a good tactic to reduce their population densities.

Currently, no post-plant nematicides are labeled for nematode control on nursery plants. Foliar-applied insecticides are reported to provide some control of stem nematodes, but don’t expect these materials to produce 90 percent mortality rates. Plants exhibiting symptoms of stem nematode infections, along with two or three neighboring plants, should be dug out and destroyed. Space plants to avoid as much leaf to leaf contact as possible.

Cool, wet springs favor stem nematodes and my impatience with this type of weather provoked me to write this article. Since nematodes must swim or migrate, from the soil or dead leaves to the stems of their hosts, moisture on stem surfaces is necessary. Although stem nematodes don’t have to contend with predation by hyenas, lions or tigers like the wildebeest, their migration comes with perils of its own. Ultraviolet light and desiccation are scourges of most nematodes, so the conditions we’ve recently experienced are ideal for their survival and arduous journey. It is important as a plant producer to recognize that although stem nematodes are very active and produce large numbers of eggs early in the spring, symptoms on their hosts typically will not become evident until the summer when they build to damaging numbers.

To avoid stem nematodes or to diagnose problems, plant tissue samples should be sent to MSU’s Diagnostic Services for nematode analyses. Typically, results will be returned within 7 to 14 days. Since all plant-parasitic nematodes are microscopic, submitting samples to a nematode lab is the only way to positively identify these pathogens. In the case of stem nematodes, their annual, spring migration is a hidden phenomenon since they cannot be seen with the naked eye.

Smart Gardening for Shorelands: Soak Up the Rain with a Rain Garden