The benefit of shorter alfalfa rotations

Higher profits in alfalfa mean high yields, and farmers should do all they can to maintain a high yielding hay field.

Producers of alfalfa may be asking whether it’s time to rotate their alfalfa production to another crop. The value of each crop produced should be considered before the decision is made for the 2011 crop. Research by Dr. Dan Undersander, University of Wisconsin forage agronomist, says that shorter rotations of alfalfa means greater profit per acre for the entire farm because of greater alfalfa yield, higher forage quality, reduced pesticide use, greater nitrogen credits and increased corn yields. Annual yield has the largest impact on alfalfa profitability because inputs, including harvesting costs, change little as yield increases. On-farm measurements of alfalfa yield and inputs showed that yield was the single most important factor determining profit. The relationship is so strong that farmers should do all they can to remain in the high yield range with their alfalfa.

One of the challenges to alfalfa profitability is declining yield with stand age. The declining yield is due to environmental stresses, wheel traffic and diseases. One of the main culprits for thinning stands is alfalfa crown rot. Crown rot may be caused by a complex of up to four types of fungi: Rhizoctonia; Stagnospora; Colletotrichum; and Fusarium. Plant death due to crown rot is often blamed on winterkill, but several studies have revealed greater stand loss in the growing season. Excessive wheel traffic, especially when fields are wet, will result in compacted soils that reduce air circulation within the soil which results in poor nutrient utilization.

Figure 1. Alfalfa yield expressed as a percentage of Yr 1 (first production year) for the seeding year and four years that follow in Michigan and the Midwest. 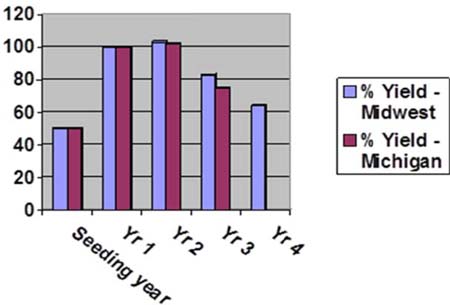 Alfalfa yield decline with advancing age of stand means that farmers should consider turning over alfalfa stands to stay in a high yield range.

The economic value of the hay crop you harvest versus the added production you may realize in a corn crop should be analyzed for your particular operation. Farmers should consider that in a rotation with corn following alfalfa, corn will yield 10 to 15 percent higher and may have adequate nitrogen (other than starter), or about 150 lbs. N, for the total corn crop when compared to a corn following corn rotation.