Meet the beetles, bugs and flies that could be invading your home this fall: the multi-colored Asian lady beetle, the boxelder bug, the western conifer seed bug and the cluster fly.

As the days grow shorter and the nights colder, a certain cadre of insects slowly and methodically makes their way to our houses. These insects spend the winter as adults and it is critical to their well-being that their little bodies don’t freeze. This is called overwintering. They gravitate to the south and west sides of many homes because these are the warmest sides of the building. They crawl upwards until they can find a tiny crack or crevice to squeeze into. Some end up in your living area. Other unlucky ones attempt to spend the winter under a piece of siding or corner molding. They go to sleep, never to wake again. Others are more successful and end up in the wall cavity between the outside and the inside wall. They are aiming for the correct side of the insulation to give them a winter’s snooze where the temperatures are perfect to dream the winter away.

In January or February, several days of sunshine will warm their sleeping area. They awake and groggily try to find their way back to the shining leaves. Often, they make a wrong turn and end up on the window sill or wandering aimlessly on the wall.

The four insects discussed in this article make their presence known across Michigan in various numbers each fall and sometimes in the winter. They do not do any house damage unless the person who finds them squashes or crushes them in a fit of pique. They can stain fabrics, but whose fault is it? Suck them up with a vacuum to avoid an unsightly spot. Michigan State University Extension educators and Master Gardeners answer similar questions each fall as the temperatures drop and insects drop in.

Often, these insects seem unfazed by various insect sprays. As they are going into dormancy for the winter, they don’t seem particularly affected as their metabolism slows. The best method if too many are making past your doorstep and into the house is to look at caulking, weather stripping and door sweeps, especially on those two most vulnerable sides.

The multi-colored Asian lady beetle insect is relatively new to Michigan in the last decade or so. They voraciously feed outdoors of mainly aphids. When handled roughly, this beetle can ooze an orange, bad smelling liquid from its leg joints. They come in a variety of colors from pale tan to a brilliant red-orange and can have no spots, many spots or large or small spots. The black and white markings directly behind the head identify these guys. 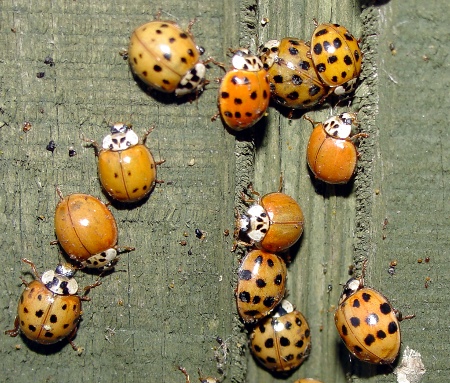 Boxelder bugs are associated with boxelder trees. They can fly, so the trees don’t have to be on your property. They are dark gray or black with red edges on the wings and body edges. There is a red V made by the wing edges in the middle of the back. 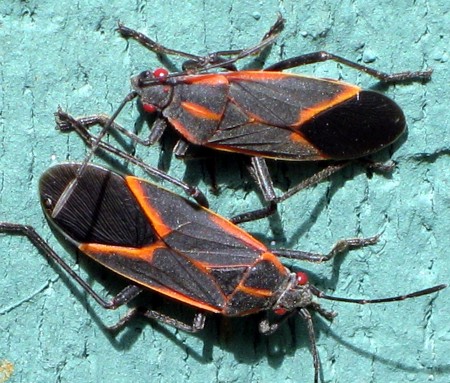 Western conifer seed bugs can be found in areas where evergreens are that are old enough to produce cones. They feed on the gooey goodness inside of the conifer seeds. To many people, the shape of the body resembles squash bugs or stink bugs. In the picture below, look at the lower part of the hind leg and notice how it is wide. That identifies this seed bug. 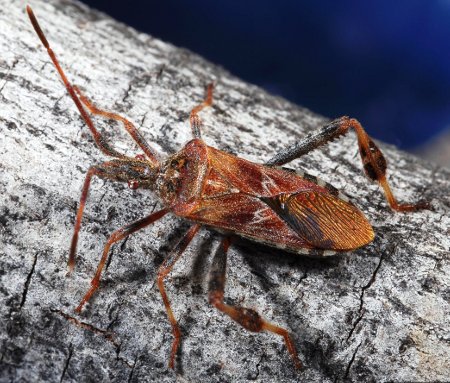 Cluster flies are found in groups which give them the “cluster” name. They are parasites of earthworms when they are juveniles and free-living as adults. They can be incredibly slow moving when found when they are going into or coming out of dormancy. 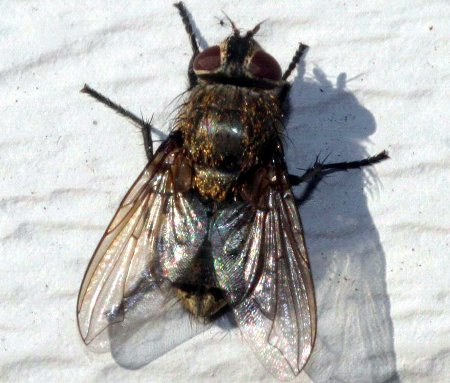 Recycle your fresh Christmas tree and protect against deer browse