The importance of first cutting alfalfa: Quality versus yield

The old cliché, you never get over a good or bad start, is very true for the forage crop of alfalfa. Alfalfa is a legume that provides an excellent blend of fiber, protein and energy. When harvested at the appropriate time, alfalfa can provide excellent quality feed. Harvest too late and the consequences are poorer quality with higher yields. Harvest too early and the consequences are high quality with both reduced yields and reduced stand longevity. While every producer may want to harvest at the “sweet spot” between quality and yield, there is always a tradeoff between quality, yield and persistence based on time of cutting (Fig. 1).

Alfalfa is versatile enough to be used by most livestock operations in a variety of ways. Therefore, the quality will have a significant impact on how the animals respond, e.g., producing pounds of milk for dairy cows, pounds of gain for growing heifers or steers, or maintaining body condition for lactating beef cow. It makes sense to harvest with an end goal in mind for quality and yield, according to the type of livestock fed. Livestock performance and body condition can be excellent markers for whether the forage is meeting animal needs. Figure 2 illustrates how Relative Forage Quality (RFQ) relates to nutrient needs for different species and classes of livestock.

Producers have been using Relative Feed Value (RFV) widely for ranking alfalfa for sale, inventorying and allocating forage lots to animal groups according to their quality needs, as well as determining when to harvest. RFQ expands RFV and is an indexing tool that includes digestible fiber. The forage quality needs of a high producing milking cow is better met with alfalfa cut at the mid-bud stage, whereas the forage quality needs of an 18-24 month dairy heifer will be better met with more mature alfalfa harvested at the 1/10 bloom stage. 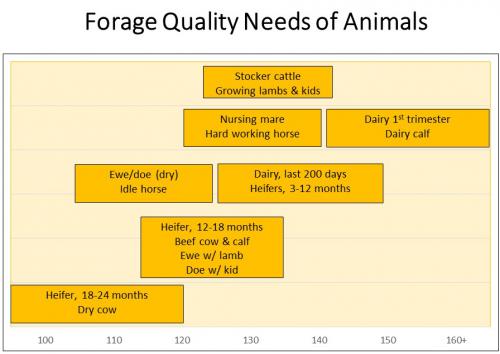 To illustrate the yield differences between cuttings, Michigan State University Extension’s Forage Variety Test Reports for 2015-2017 were summarized for East Lansing, Lake City and Chatham. East Lansing has historically used a four-cut system for alfalfa and Lake City and Chatham utilize a three-cut system. Each location will typically have unique growing environments for both temperature and rainfall. 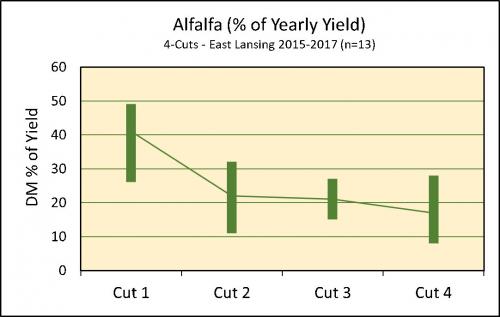 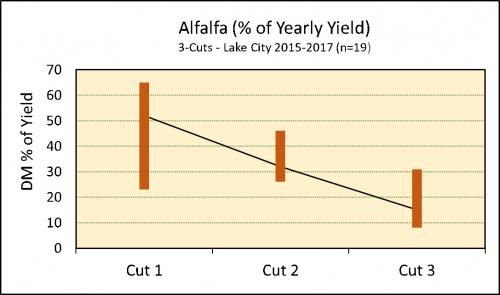 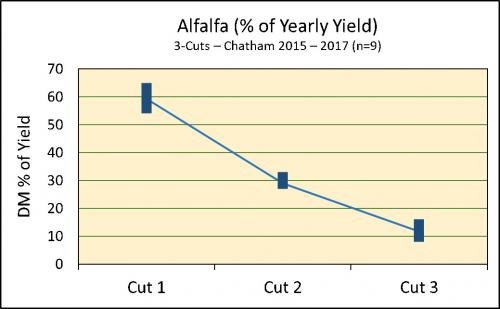 The differences in percent of total yield among cuttings is more dramatic as the number of cuttings per year decreases from four to three.

In summary, if producers are harvesting their first cutting alfalfa for quality, remember the largest yield of the season is historically from first cutting. Therefore, keep a close eye on crop growth since temperature and moisture can affect plant maturity quickly (see Figs. 3, 4 and 5).