The role of the scribe

Having scribes in scored classes will go a long way toward ensuring successful, educational horse shows.

In 2010 the American Quarter Horse Association (AQHA) reported entry numbers per class rail classes, such as western pleasure and hunter under saddle, as compared to individually judged classes, such as trail or western riding. The report found that participation in rail classes was decreasing while the participation in individually judged classes was increasing at a faster rate. Why? One suggestion was that the exhibitor felt that were getting an “honest” look from the judge and not getting “ignored or lost” in the group. Individually judged classes have increased in both importance and popularity, and the industry is asking that these classes provide them with a more detailed evaluation. Today’s classes that use this manner of evaluation are reining, english/western riding, trail, showmanship, equitation and horsemanship, and some over fences classes. Michigan State University Extension also recognizes that the most effective means of realizing the educational portion of these efforts is to post the score sheets, and for exhibitors to learn to read them. In order to effectively & efficiently provide individual scores & feedback, shows utilize scribes to assist judges. The role of the scribe in horse show management is critical to the education of exhibitors.

The use of scribes is not new to the equine industry. The first scribes were used in the dressage arena to record the scores of each maneuver in each test. These score sheets were handed out to individual exhibitors to assist them in better understanding their discipline. The National Reining Horse Association (NRHA) moved to a new scoring system in the 1990’s, and as a result scribes became very necessary in order for judges to truly see the maneuvers performed and penalties incurred. Things happen so quickly in reining classes that there is no time for a judge to look down to record a score, or they may miss something important to the fair judging of the class. Today scribes are a must in every pattern class ridden in every horse show of any credibility.

The dressage discipline pioneered the use of scribes and have extensive training and hiring programs for scribes at their shows. The dressage score sheet is an individual, numerical recording of the test and allows for notes from the judge to each exhibitor. Since dressage shows are ridden one at a time at gaits ranging from the walk to the canter, time is less of a factor compared to reining classes as that test or is often the only one ridden in that block of time. It is the role of the scribe here in dressage to again record the Judge’s scores and comments on the score sheet. 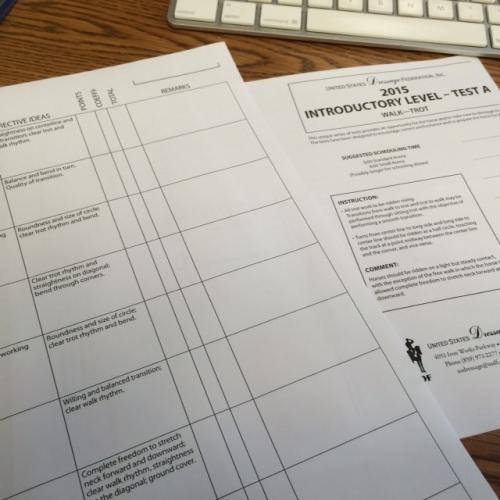 Example of a dressage score sheet

Just as in the dressage arena, when the NRHA first went to their current scoring system they took great interest in making sure that these notes were accurate and then posted them publicly. The NRHA score sheets have two possible scores for each maneuver. One score indicates the exhibitor’s overall quality of the maneuver. The second score is for recording penalties, should they be incurred. Each maneuver must receive a maneuver score, but may not incur a penalty score. Penalties are movements within each maneuver, which are faults of varying degree according to the prescribed pattern and maneuver. 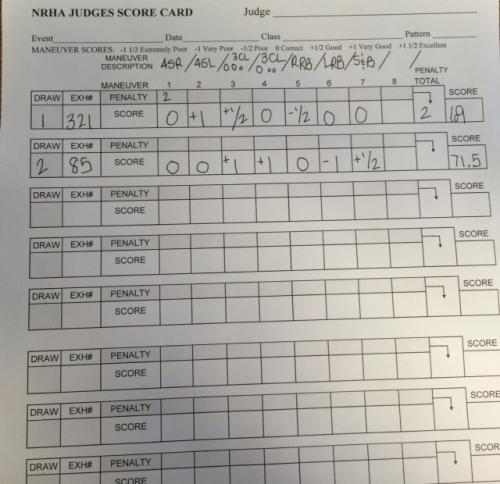 Upon completion of the pattern, each of the scores in both sections (maneuver or penalty) are added to or subtracted from the average of 70.

The possible penalties are described in detail in each breed association’s rulebook. As you may have guessed, penalties are always subtracted from the total score. The scribe records each penalty separately. In these classes these scores may come very fast so to it is imperative that the scribe is listening to the judge very closely. Any questions the scribe may have, should be addressed immediately at the end of each run.

Although the judge is ultimately responsible for the final placing, typically the scribe does the math required. It is the scribe’s responsibility then to listen to and record every score given to them by the judge and add or subtract these scores to an average of 70, recording the final score on the score sheet. In order for the flow of the show to continue this must be done both accurately and quickly. Listening and math skills are the most important qualities of a good scribe.

What is the process and how do the scribes accomplish their task? The process is actually far easier than most people think. AQHA’s pattern class score sheet Fig. 3 is shown below, and is used for showmanship, equitation, and horsemanship classes. The pattern is divided into seven maneuvers and there is an area below each maneuver for a score or notation to be placed. There are no penalties to be recorded, however there may be major or minor faults incurred. These faults are described in detail in the AQHA rulebook. Using this score sheet the judge will give the scribe the notation that is to be placed into each maneuver box. The scribe will record only what the judge says and no more. 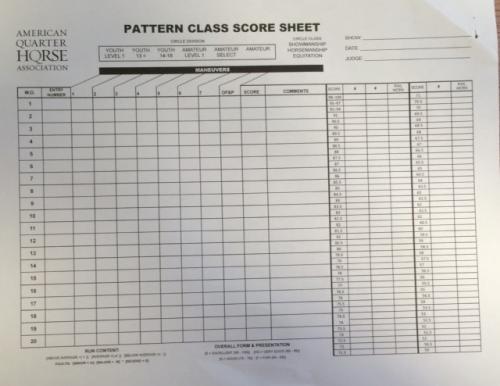 The notations may include a “+” indicating an above average maneuver, a checkmark designating an average maneuver, or a “–“ indicating a poor maneuver. In some pattern classes these scores may come very quickly. For each exhibitor, the judge will assign an overall form and presentation score. Additionally, at the end of each exhibitor’s run the judge will give the scribe a final score. This score will then be recorded on the table at the far right, often called a ladder sheet. This ladder sheet helps keep the judge organized and able to rapidly fill out their card when the class concludes. This saves time “sorting” out all of the scores at the end of the class, and often prevents errors.

In 4-H and open horse shows any of the major breed score-sheets are useable. Each judge may actually have a slightly different method of using the pattern class score sheet. For example, on a personal note I (Elliott) prefer to assign a numerical score in every box for each maneuver, similar to those maneuver scores provided reining, western riding, or trail.

The use of score sheets is to make the process of evaluation more fact based and less subjective. In order for this to be effective, the scribe and judge must have a reasonable amount of time to speak prior to the class so they can become familiar with how the judge prefers to relay their scores and how the scribe will record them. This is critical for an honest, fact-based, and accurate recording and class placing.

Well-trained scribes are the most effective way to produce the educational and accurate recording of pattern class scores. This provides exhibitors with some idea of what a judge was thinking when placings were determined. An exhibitor may be able to say “While my stop and back were excellent according to the scores, I will need to work on my spins at home, as those were poor.” As a result it is necessary that show management make sure that the people they ask to scribe are able to communicate and quickly do math, under some pressure. This will go a long way to ensuring a successful, enjoyable, and educational horse show for all.