The short, sweet life of cilantro

Cilantro is a delicious but misunderstood herb to invite into your garden. 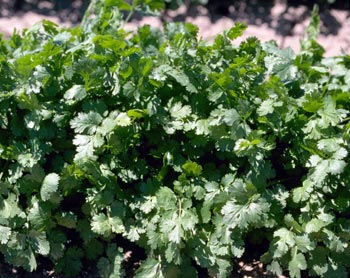 When creating your garden party list of vegetables and herbs to grow this year, consider cilantro. This herb has gotten a bad reputation from some gardeners as being difficult to grow. It isn’t once you understand how to grow it. The struggling gardeners assume cilantro will grow just like parsley and a few other leafy herbs and vegetables, expecting it to be there for the entire growing season. But smart gardeners have learned what assuming can do.

Cilantro is one of those two-for-one plants. The leaves are used to top many dishes, especially Mexican food. This herb does not withstand being cooked; it loses its flavor. But the seeds were the original reason the plant was grown. The seeds are called coriander. They are crushed or ground into Indian curry and in Asian, Mediterranean, African and Middle Eastern cuisines.

Cilantro is a cool season herb. It grows best in the spring and fall and can even withstand light frosts. It cannot tolerate the heat of summer. When temperatures rise, the plant bolts. This term means that the plant rapidly begins flowering and making seeds and dies. As it begins to bolt, it loses its unique leaf flavor. To keep a steady supply of cilantro coming from the garden, plant seeds every two to four weeks. You don’t have to use the entire packet of seeds. After all, this is a flavor enhancer, not a main dish.

Garden growing conditions for cilantro are very similar to almost all other vegetables and herbs. A soil that is light and well-drained with a generous amount of organic matter is beneficial. The plants need full sun for most of the year. The soil pH should be 6.5, which is slightly acidic. Keeping plants well-watered and mulched with straw keeps moisture in and soil temperatures lower. When it is too hot for cilantro to do well in the garden, find a location that has afternoon shade. This will allow the plants to grow as long as they are mulched and watered well.

When the plants bolt and go to seed, you now have a choice. You can leave the seed pods on until they ripen and turn brown, or the seeds can be replanted for more cilantro. Each seed pod contains two seeds. The pods can be removed and rolled in your hand to get off the outside hull. The seeds are coriander to be used for another culinary adventure. If you leave the seed pods on the plants, this will happen naturally.

Each growing season, Michigan State University Extension hotlines around the state get calls from frustrated gardeners about cilantro. Once they understand how the plant grows, success can be theirs. Just because the herb is used in hot and spicy dishes does not mean the growing conditions should be the same!

If you need to get a soil test before the growing season begins, go to www.msusoiltest.com.