Invasive: (especially of plants or a disease) tending to spread prolifically and undesirably or harmfully.

Dealing with non-native invasive forest pests is difficult due to the widespread acreage that these pests can cover across the Michigan landscape. Lack of natural predators or parasites makes it easier for these invasive pests to spread and kill trees in our forests. Preventing the introduction of new invasive species is the goal of the Michigan Sentinel Tree Network and Eyes on the Forest Project.

The nice spring weather that we have been experiencing lately has created nearly ideal growing conditions for gardens, lawns — and weeds! But, try as they might, many homeowners just cannot rid themselves of every weed in their lawn. While some can argue whether weed-free turfgrass is really necessary — few can argue about how severe weed problems can become if left untreated in a lawn (think of a carpet of dandelions in full-bloom that you’ve seen in someone’s lawn).

As many people also know, it can be very difficult to manage your home lawn (typically on lots less than one acre in size) to control pesky invasive weed problems. But if you think that’s difficult, try envisioning what it’s like to combat an unwanted invasive pest in thousands of acres of forest in Michigan. The effort and expense of managing a forest invasive pest seems almost impossible to deal with at that scale.

Lucky for us Michiganders, many forest pest problems don’t usually require large-scale treatment. Native insects such as Eastern Tent Caterpillar or Fall Webworm are good examples (see pictures below). Because the nests they create are very visible, most people recognize when populations are on the rise. Every several years, populations of these insects increase to the point that they become nearly “epidemic” across our landscape. Fortunately, there are a host of predators, parasites and/or weather conditions that will eventually cause these insect populations to “crash” and return to lower, less noticeable levels. Although their appearance is unsightly, these caterpillars don’t usually cause widespread mortality of trees and forests. 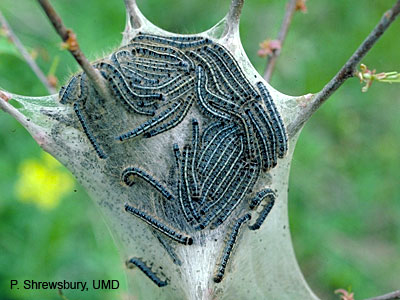 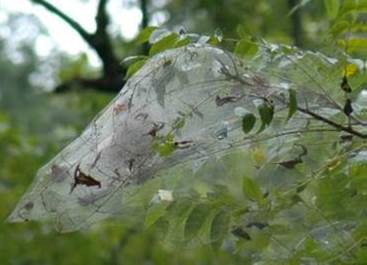 That’s not usually the case with non-native invasive forest pests that Michigan has experienced over the several years. Because our forests have not evolved over time with these invasive pests, they don’t have many native, naturally occurring predators or parasites that keep them in check. Consequently, forest pest problems such as beech bark disease or emerald ash borer, have had huge impacts on our forests — causing widespread mortality in many cases.

Unfortunately, there are other invasive forest pests that are threatening to invade Michigan if we are not able to keep them from entering our borders. Three of the most likely, and potentially destructive forest invasive pests to Michigan, are the Asian longhorned beetle, hemlock woolly adelgid and thousand cankers disease of walnut.

To date, populations of Asian longhorned beetle and thousand canker disease have already been confirmed in Ohio and other nearby states. Here in Michigan, a fairly sizeable infestation of hemlock woolly adelgid was discovered in Ottawa and Muskegon Counties in 2015, so there is reason to be concerned and be on the lookout!

Michigan residents who are interested can help keep a lookout for these unwanted forest pests by becoming Sentinel Tree volunteers with the Michigan Eyes on the Forest and Sentinel Tree Network.

Funded by the Michigan Invasive Species Grant Program, the MSU “Eyes on the Forest: Invasive Forest Pest Risk Assessment, Communication and Outreach Project,” links research with outreach and communication projects through the MSU Department of Entomology and Michigan State University Extension. For more information, please visit the Michigan Eyes on the Forest webpage or the Midwest Invasive Species Information Network webpage.Dealing with non-native invasive forest pests is difficult due to the widespread acreage that these pests can cover across the Michigan landscape. Lack of natural predators or parasites makes it easier for these invasive pests to spread and kill trees in our forests. Preventing the introduction of new invasive species is the goal of the Michigan Sentinel Tree Network and Eyes on the Forest Project.