I am happy to report that no one has called me about cicada killers in the past two weeks.  However, other types of wasps have moved center stage to take their place.  Ground nesting yellow jackets and bald faced hornets seem to be all rage these days.  I discovered a nest of eastern yellow jackets at the base of my son’s basketball hoop a week or so ago.  Since their nest was located near where I park my truck and their mood tends to sour in late summer, I decided to kill off the nest.  I chose Seven Garden Dust as my weapon of choice.  Sevin works great on ground nesting yellow jackets because its slow acting and wasps pick it up and spread it around the nest.  I put a couple of tablespoons in a small paper cup, and simply dumped the dust into the nest opening as I briskly walked by.  It’s never a good idea to linger too long around a yellow jacket nest.  The nest appeared dead two days after treatment.  I intended to take pictures of the nest opening and then dig the nest up and take more pictures of the comb and dead wasps for this week’s CAT Alert article.  When I went out to the nest site this morning to take pictures, I discovered that some varmint, either a raccoon or skunk, had beaten me to it.  The nest had been dug and comb destroyed.  The accompanying photos show the nest just as I found it this morning. (view photos)

My neighbor also discovered a nest of wasps this past week, but his was an aerial nest of baldfaced hornets and they were in a small maple tree next to his driveway.  About ten years ago, he had found a similar nest on branch that hung over his driveway and he asked me back then what he should do about it.  Despite my advice to leave the nest alone, he couldn’t control himself and thought it prudent to chuck a few rocks at the nest (this behavior supports the notion that boys do not grow up, ever).  He returned a few minutes later to inquire if I might have some bug spray that he might use to quell the now swarming wasps.  I didn’t have any, so he left.  A few minutes later, I noticed a large plume of black smoke rising from my neighbor’s yard.  Since he didn’t have any insecticide, my neighbor decided that the next best thing to do would be to douse the nest with gas and touch it off with a match.  Boys will boys!  About an hour later, he was back at my house asking he if might borrow my sawhorses so he could cordon off his driveway to prevent his wife from driving over the now smoldering nest that was still attended by a swarm of very angry baldfaced hornets.  Apparently, my neighbor has matured some since then because this time around he chose to leave nest alone.  I took some pictures of his nest this morning to share with you.

I found one more type of wasp nest under the eve of an old shed of mine.  The organ-pipe mud dauber is my favorite species of wasp.  I like the look of their nests.  The wasp themselves have always seemed friendly and they provision their nests with spiders, which their babies eat as they develop.  An excellent review of Organ-pipe mud daubers can be read at: http://entomology.uark.edu/museum/muddaub.html

Several nice photos of Eastern yellowjackets can be seen at:
http://www.invasive.org/browse/subthumb.cfm?sub=3431&start=1 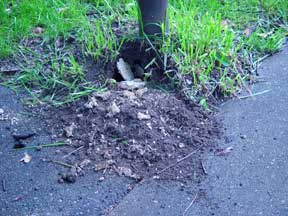 The remains of the Eastern yellow jacket nest that I
had poisoned with Sevin Dust. This nest was built at
the base of the pole of my son's basketball hoop. 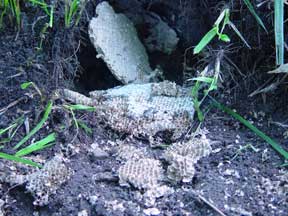 This photo shows all of the comb that a skunk or
raccoon had dug up in order to eat the developing
brood. I wonder how the Sevin tasted. 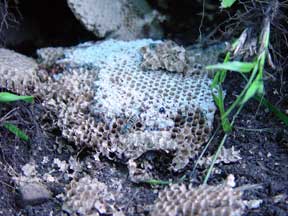 This close up shows that a few yellowjackets survived
the Sevin Dust application. 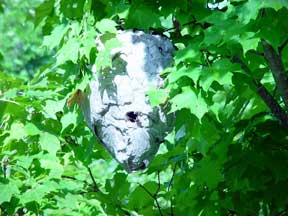 A close up of my neighbor's bald-faced hornet nest.
If you look closely, you can see a wasp in the entrance
daring me to try something. I chose not to. 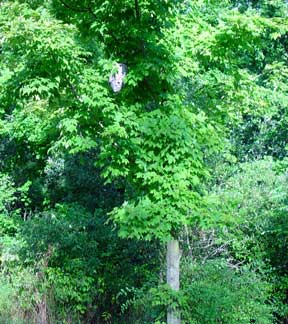 My neighbor discovered this bald-faced hornet nest
in a small maple tree at the edge of his driveway.
Like many others, he claimed the nest appeared out
of nowhere in the past few days. 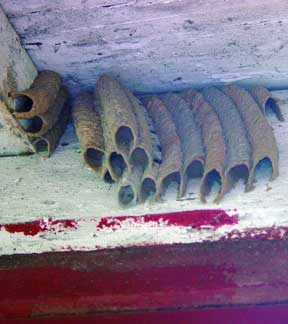 Woodpeckers and the house: It’s your siding versus their chipped holes

What can I do about the mosquito super emergence?