There is still time for dormant sprays in grapes

There is still time to apply dormant sprays in grapes. The goal of the dormant spray is to eliminate fungal pathogens that overwinter in or on the woody parts of the vine. While it is not possible to eradicate all inoculum, dormant sprays can kill or debilitate the fungus so it produces fewer spores, reducing disease pressure during the growing season. Dormant sprays are useful for management of Phomopsis, powdery mildew, black rot, and anthracnose. In some years, we have even seen a reduction in downy mildew as well but only with copper sprays. Since the downy mildew pathogen overwinters in leaf residue on the soil, this may have been caused by copper residues which landed on the soil surface. In most years we have seen a benefit from dormant sprays, but the degree has varied (from 10-70%). Results were not as good in very wet springs, which probably led to washing off of the dormant spray before it was able to do its job.

To cover your bases, two dormant sprays may be applied, in early and late spring, or fall and spring. If bud burst has occurred, you can still apply dormant spray materials or mancozeb at 1-2” of shoot growth for Phomopsis control. Dormant sprays should not be used as a stand-alone disease control measure.

Products used as dormant sprays are Lime Sulfur or Sulforix, Cuprofix or other copper product, Sulfur (liquid form recommended), and JMS Stylet Oil or other oil. Formulations that “stick” to the wood are best. To get the maximum benefit out of dormant sprays, it is important to ensure thorough coverage of the trunk and canes by focusing nozzles of spray equipment, lowering air intake, slowing down and spraying at a moderately low volume (e.g., 20-30 gpa) which allows good coverage of the canes while keeping the product fairly concentrated. Using a high volume in this case only results in dilution of the product and run-off. Spraying every row is advised. Small vineyards are better sprayed with a hand pump sprayer.

In a replicated small-plot trial in cv. Chancellor in Fennville, Michigan, in 2009-10, the following treatments were applied with a backpack-style sprayer in an effort to reduce cleistothecium production in the fall and reduce viability of cleistothecia in the spring.

Powdery mildew was monitored on a weekly basis during the growing season and first was seen on July 21 in the untreated control plots, on August 4 in the Stylet Oil Fall spray plot, and on August 14 in the other treatments. The area under the disease progress curve (AUDPC), a measure of disease severity throughout the season, was significantly reduced in all treatments and the season-long program was not better than a single dormant spray. It should be pointed out that some powdery mildew strains at the Trevor Nichols Research Center are resistant to strobilurins, which could have reduced the efficacy of the seasonal program. This suggests that dormant sprays can significantly reduce powdery mildew through most of the growing season and can be cost-effective. It did not make a difference whether sprays were applied in the fall or in the spring, although the treatments that included a spring Sulforix spray tended to have the lowest disease levels. 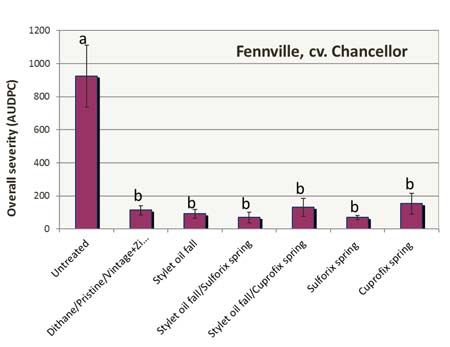 In 2005, we compared different timings of “dormant” sprays for control of Phomopsis in ‘Niagara’ grapes, including sprays after bud burst (Table 1). The difference in spray timing was only 11 days that year. A reduction in rachis infection at harvest was seen for both Sulfur 6L and Cuprofix in all cases. While Cuprofix at 1-2” shoot appeared somewhat less effective, it was not statistically different from the other treatments, which means that they could have been due to natural variation in the vineyard. The season-long fungicide spray program was the most effective at reducing Phomopsis at harvest. 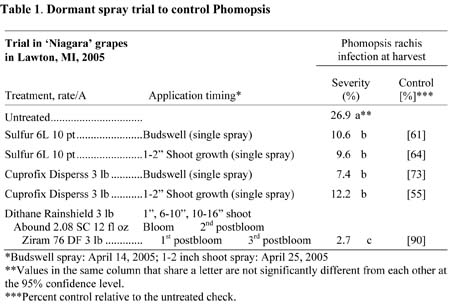 We did not see any phytotoxicity as a result of the treatments in ‘Niagara’ grapes, even when applied at 1-2 inch shoot growth. ‘Niagara’ and ‘Concord’ are only slightly copper sensitive. The risk of copper phytotoxicity to green leaves is greater under cool, wet, slow-drying conditions which allow copper ions to be absorbed by the leaves. Concord is sulfur sensitive, but sulfur phytotoxicity is much more likely at temperatures above 85-90ºF which are unusual at this time of the year. We have seen no phytotoxicity from sulfur dormant treatments in Concord.

The Why and How for Training, Pruning, and Crop Management in Small Fruit and Tree Fruit

The Dirt on Plant Nutrition