A recent visit to the Ash Alternative Arboretum established in 2003 at the MSU Tollgate Education in Novi, Michigan offers some insights into selecting alternative landscape trees to replace ashes.

While the emerald ash borer continues to expand into new states (Kentucky was added to the list last week), emerald ash borer is old news here in Michigan, especially in the southeastern part of the state. Efforts to restore urban and community forest canopy lost to emerald ash borer will continue, however, for the foreseeable future. A recent visit to the Ash Alternative Arboretum established in 2003 at the MSU Tollgate Education in Novi, Michigan offers some insights into selecting alternative landscape trees to replace ashes. A couple of elm cultivars, in particular, have emerged as shining stars in the demonstration planting that includes five specimens of 37 different species and varieties. All trees were planted as 1.5 to 2-inch bareroot liners by Tollgate volunteers. Tollgate farm manager Roy Prentice has overseen the maintenance of the planting.

Triumph elm has done very well at the Tollgate planting. This elm develops a vase-like crown with age and has dark green, glossy leaves. A large tree can grow to 55 feet. (See photo) 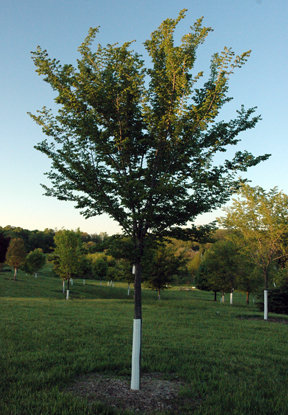 Compared to most of the other selections planted in the arboretum at Tollgate, Accolade elms look like men among boys. Growth of these trees has been outstanding – the trunks of the trees have grown fast enough that they have split off their plastic rabbit guards (see photo). Like Triumph elm, Accolade elm has dark green, glossy leaves and develops into a large tree. Although elms are often thought of “ugly ducklings,” both Triumph and Accolade are quickly developing well-formed, vase-like crowns. 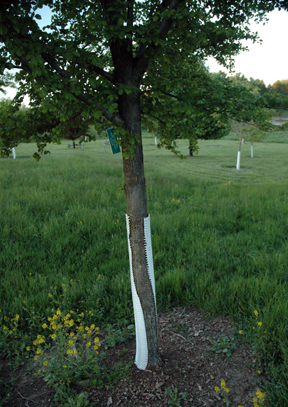 The elms are part of series of elm cultivars that have been developed with high tolerance of Dutch elm disease. Most of the new elms are hybrid crosses with Asian and European elm species, though selections of American elm that are tolerant of Dutch elm disease are also available in the nursery trade. 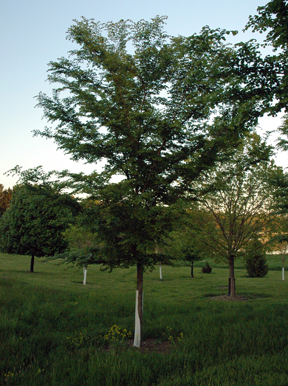