It seems that in most years the lab starts getting in ticks toward the end of May. But this year, we received our first ticks before the first of May. The tick we see most often in the lab is the American dog tick, Dermacentor variabilis (Acari: Ixodidae). Also, we are seeing an increase in tick submissions from the mid-Michigan area. 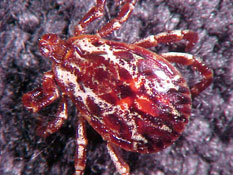 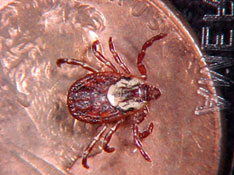 The American dog tick is the most commonly found tick in Michigan and can be distinguished from the deer tick and brown dog tick by the presence of white markings on the back. Dog tick bites rarely result in serious disease in Michigan, but like other wood ticks, it is a known carrier of Rocky Mountain spotted fever and tularemia. The cases of Rocky Mountain Spotted Fever reported in Michigan have been from primarily southern counties, particularly those located directly north of the Toledo Airport. Also, toxins injected with their bites cause itching, fever and in some cases tick paralysis. Be on alert for any rash, which is a primary symptom of both Rocky Mountain Spotted Fever and tularemia, that develops after a tick bite.

Mice appear to be the preferred hosts of immature stages of the American dog tick while the adults prefer to feed on dogs and other large mammals. Dog ticks can live for over a year without food. These ticks are most likely to be encountered in the spring and early summer along animal paths in grassy, shrubby areas adjacent to woodlots and forests. Family members and pets should be inspected daily where ticks are known to be abundant. Insect repellents may help keep wood ticks from biting, also apply duck tape around pants cuffs to keep ticks from crawling up the legs. If an attached tick is found, it should be removed by placing tweezers near the head and gently pulling it off. Be careful not to squeeze the tick as this can inject more toxins into the wound. Keep in mind that ticks cannot feed immediately after attaching. They require several hours to imbed their mouthparts deep enough to take a bloodmeal. An unfed tick (unengorged) tick is quite small and flat, but a fully engorge tick looks like a small grape. Yuck! If you are unsure about the identity of your tick, save it in a vial of rubbing alcohol and sent it to the lab for identification.