‘Colossal,’ ‘Nevada,’ ‘Precoce Migoule’ and other cultivars are susceptible and should be checked for chestnut blight cankers in July.

There are few diseases of chestnut trees in North America. However, the one disease chestnut trees have, chestnut blight, is still thought of as one of the worst tree diseases in history.

Chestnut blight has killed more chestnut trees around the world than any other forest disease. The fungus that causes chestnut blight can be traced from China and Japan where it did not cause much disease when compared to North America and Europe where it killed several billion trees. More recently it was found in Australian chestnut orchards and they destroyed several orchards and thousands of trees to hopefully eradicate this disease.

We could inoculate the trees with specific blight strains to determine if they are resistant, tolerant or susceptible, but that is very hard on the trees and those tests may not give an accurate, natural response. For example, even the chestnut blight-resistant Chinese chestnut trees can act susceptible when directly inoculated with the blight fungus. So, we will wait and see the natural response of the various European X Japanese hybrid cultivars that we will be planting in Michigan’s future orchards. These might include the cultivars ‘Bouche de Betizac,’ ‘Marki,’ ‘Marsol,’ ‘Maraval’ and ‘Marigoule.’ ‘Bouche de Betizac’ and ‘Marki’ are both pollen sterile, but the others produce pollen.

For those of you who have planted ‘Colossal,’ ‘Nevada’ (most of these have died from cold winters), ‘Precoce Migoule’ and other European X Japanese hybrid cultivars, you should scout your trees closely for chestnut blight symptoms (Photo 1).

The primary symptom is called a canker and it is a bark infection where the fungus is actively growing within the bark. As the canker enlarges and begins to girdle the branch or stem, other symptoms such as yellowing leaves, small leaves, leaf drop, dying branches, shoots developing on branches within the canopy of trees may occur. These shoots usually form beneath the canker and can be used as signals of infection higher up in the tree.

One of the most common symptoms can be a massive amount of sprouting at the base of the tree. Many things can cause sprouting to occur other than chestnut blight, and just because you have basal sprouts does not mean you have chestnut blight, but you need to check periodically. This is a good time to scout for blight as the active cankers are producing spores now (Photo 2). The spores come from an orange, very small structure in the outer bark called stroma. 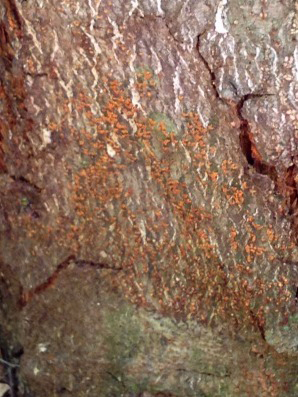 These fungal reproductive structures are bright orange this time of year and are easy to see. If you are growing European X Japanese hybrid cultivars and wonder if you have chestnut blight, walk your orchard and scout for the cankers where orange stroma may be appearing. Sometimes sunscald or southwest disease is similar to the kind of symptom caused by chestnut blight. If you allow the chestnut blight cankers to get to large before you contact your nearest Michigan State University Extension expert, you may lose the tree.

What can be done?

To make a long (20 years) story short for this article, we make wounds in the bark around the canker on the tree and apply a salve made up of the chestnut blight fungus naturally infected with a virus found in the Michigan recovering American chestnut stands. The virus we are testing is from a stand of trees from Grand Haven, Michigan. This virus, called a “hypovirus,” only infects the chestnut blight fungus. When present, it weakens the blight fungus and the fungus has trouble causing disease—the tree can survive the infection. When the hypovirus infects the fungus, we say the fungus is hypovirulent or less able to kill the tree. So, when we find cankers, we wound the outside of the canker, place the hypovirus containing blight strain on the canker, the hypovirus moves into the strain causing the canker, and the tree begins to heal the canker with wound tissue.

In 2011, we began research using this Michigan-based, naturally occurring biological control on European X Japanese hybrid cultivars on the MSU campus. We are also willing to treat cankers in chestnut orchards that may provide research opportunities for us. In 2014, we have been working in seven different European X Japanese hybrid cultivar orchards around the state. Photo 3 shows how, within a year, the chestnut blight canker, treated with the biological control, slows down the expansion of the canker allowing wound tissue to heal over the canker. In the photo, it can be seen that the canker was scratched and then the hypovirulent fungus applied. The swelling at the edges is due to wound tissue produced by the tree. There is a reduction of orange stroma indicating the blight fungus is not reproducing and the expansion of the canker is stopped. 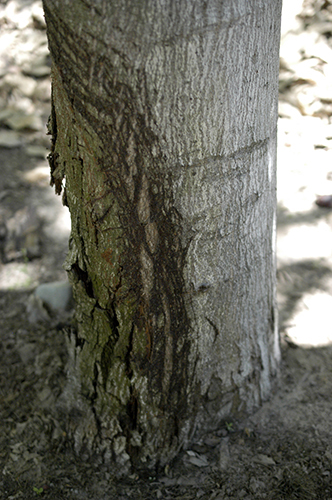 Photo 3. A side view of a chestnut blight canker on ‘Colossal’ treated with the naturally occurring biological control. The canker stops expanding around the trunk. Few reproductive structures called stroma are present. A ridge of wound tissue swells at the edge of the canker