In 2009, the disease known as late blight affected many tomato and potato crops throughout the northern states. The disease was thought to have started in tomato transplants. This is a new strain of the pathogen not previously reported in the United States. The disease is an oomycete similar to downy mildew of many herbaceous species and is known as Phytophthora infestans. The new genotype is known as US-22 and causes late blight on tomatoes and potatoes. The pathogen can only survive in live tissue such as potato tubers and does not overwinter on tomato debris. In years when we have had a serious late blight epidemic, it is often followed by sporadic outbreaks in following years. The source in following years is usually potato tubers that have survived the winter in fields; known as volunteer tubers.

Once the disease has taken hold of the plant, there is very little that can be done to halt its progress to other plants other than destruction of the affected plants. Here is some information on the disease and some tips for growers for 2010.

What can you do?

Professional/commercial growers have difficulty growing disease-free crops. Please help to maintain businesses and jobs in your area by following the above guidelines.

The Michigan Department of Agriculture has the authority to declare an area a nuisance and to eliminate the source of late blight inoculum in order to prevent the spread of disease to farmer’s crops.

US-22 genotype of Phytophthora infestans is shown in the following photos: 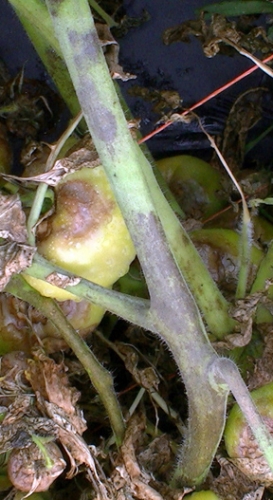 Vegetable pesticide series: Should I use it during bloom?