Train trees in a timely manner in the initial years and reap the rewards in subsequent years.

Regardless of the training system or spacing, growers developing young orchards need to train trees in a timely manner in the developing years to reap the rewards in following years. This practice is most critical for those developing trees in high density orchards where tree spacing is tight. Following these principles is challenging given the competition for resources in a commercial orchard. The goal in the high density orchard is to get trees in a state of balance, or equilibrium, regarding vegetative and reproductive growth. Only the grower can determine the level of balance and how to achieve this goal.

Variety, rootstock vigor, soil and nutritional status all contribute to determining how to handle trees. Many growers are, for the first time, developing tall spindle trees on dwarfing rootstocks with tree spacings of 3 x 11 or 12 feet. The key to success of these orchards is to retain week branching and recycle vigorous branches. Another key is branch bending to slow down linear growth and influencing newly formed axillary buds into becoming reproductive (formation of fruit spurs).

Removing competitive laterals in upper portion of the leader

This is often over-looked in the early part of the season, but is important in keeping the upper portion of the leader growing and maintaining strength and vigor. One key to productivity of the tall spindle is approaching heights of 12-13 feet by the fourth growing season. Attaining this tree-height goal achieves the high productivity needed per acre to help cover the expenses of establishment as soon as possible. In many Southern Michigan regions, this is naturally attainable with only pinching a couple laterals once they have grown about 6 inches in length. If laterals are allowed to compete, reaching target tree heights is more challenging. For orchards in Northern Michigan, which often are established on coarse soils, removing competing laterals is extremely critical to maintaining leader dominance and vigor. In many cases in this region, pinching back several laterals 8-12 inches below leader or apical bud may be necessary (Photos 1-2). 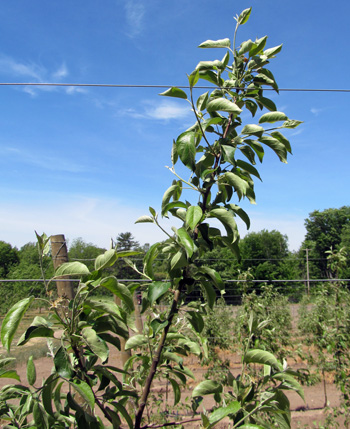 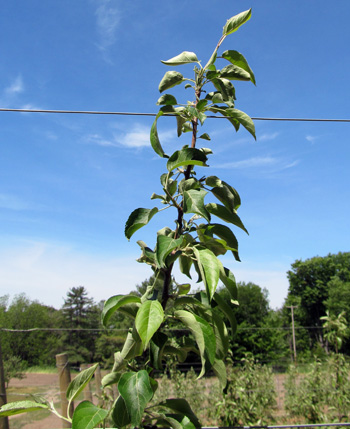 Bending branches below the horizontal

In Michigan, the late June through late July period becomes critical for flower bud initiation of axillary buds in apples, perhaps a week later in this cooler than normal year. The process is followed by flower bud differentiation which occurs through the remaining part of the season where floral primordia begin to actually develop and differentiate. We know from past research that flower bud initiation can be influenced by training and management practices. Most importantly, we know that bending branches down below the horizontal not only slows branch development down, but also encourages flower bud initiation. This is most important when trees are planted at 3-foot spacings. 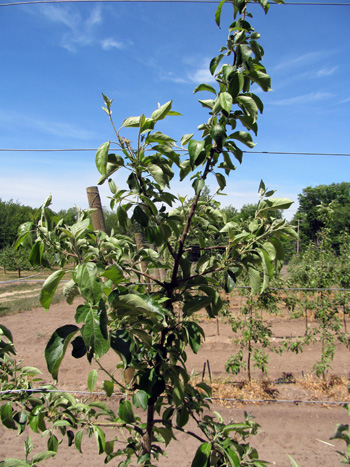 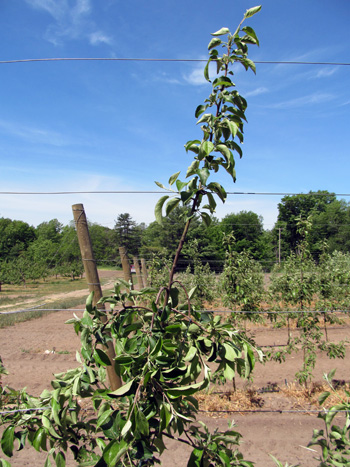 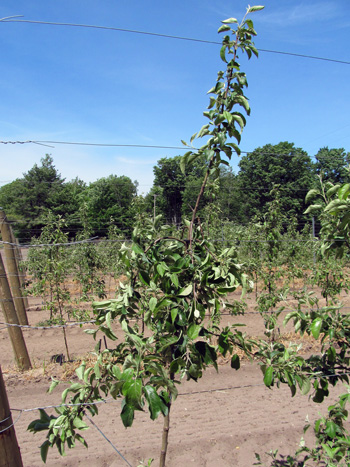 In the tall spindle, the goal is to bend as many branches down below horizontal as possible, concentrating on those which are more vertical and strong. In the vertical axe where trees are planted further apart (5 x 15 feet), the lower 4-5 feet can remain horizontal while the upper portions of the leaders are bent down as in the tall spindle.

I know that many growers fear the training work, but it pays off and lasts the initial four to five years. Once trees attain maturation, you have done the job of achieving the necessary goal of “balance” (Photo 6). As I often tell my students, training branches in the initial years rather than pruning strong branches during the winter avoids wasting resources. 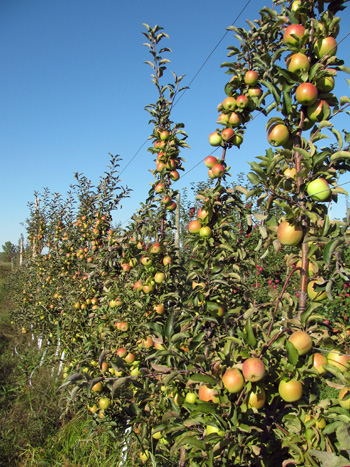 Dr. Perry’s work is funded in part by MSU’s AgBioResearch.