In the first article in this series, Michigan State University Extension explained how important the timing of training hops can be. Here are some other factors that can affect your yield while training hops. Hop bines only climb in a clockwise direction (due to thigmotropism and phototropism) around guide strings and attach to the string with small stout hairs called trichomes. Second- or third-year hops are generally productive enough to be trained with two strings per plant. Most hops are trained irrespective of location by June 1. Keep in mind that the largest bines that emerge on plants (second leaf or older) are not necessarily the best to train. These are referred to as “bull shoots” and have a hollow center, making them more susceptible to wind damage as they are more brittle and less succulent. Most crowns produce two to three bull shoots, which often differ in color, have larger internode spaces and are more fibrous than other bines.

Growers should select two to four succulent bines to train (Figure 2). The remaining bines are generally chemical burned back later in the season, once the plant is at least 10-12 feet tall to encourage growth. Hops that are trained properly, at the appropriate time will yield higher than those that aren’t. 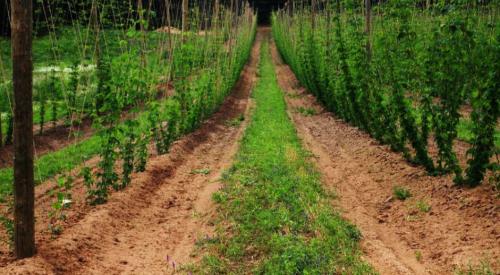 For more information on hops, including presentations from the recent Great Lakes Hop and Barley Conference please visit the Michigan State University Extension website on hops.

The importance of testing hop fertility

What exactly is craft beer?