Springtime is here, which means farmers and gardeners are starting to think about waking up their fields from their winter slumber. A great way to get a head start on the season is to start seeds indoors for transplanting.

It’s the time of year when we start thinking about the steps to wake up our farms and gardens from their winter hibernation. While in some areas of the state the snow has melted and the ground is already being worked, our fields in the Upper Peninsula are still snow covered. However, that doesn’t mean that we can’t get started on the production season.

In northern climates, one of the biggest challenges we face is the short growing season. In some years, many of the long-season crops, such as winter squash and onions would not have enough days to fully mature before the threat of frost. However, starting plants in protected environments allows us a head start on the field season and can result in a healthier plant.

This will be the first of five articles focusing on transplant production for the small farm or garden. Ultimately, these articles are designed to help you produce healthy transplants that can then be grown out in the field or in hoophouses, helping extend your production season further into the spring.

Let’s begin with tools and techniques for transplant production:

At The North Farm, we use a few systems for transplant production. While there are several other systems being developed for the small farm (including the popular Paperpot Transplanter) that rely on specialized equipment and can increase transplanting efficiency, this will focus on the two primary systems used at The North Farm.

Plug flats are plastic trays containing cells of varying sizes in which plants are grown in a potting mix. Advantages of this system include uniformity in tray size, flexibility in usage and the ability to reuse flats year after year. We have also seen tremendous gains in efficiency with plug flats this year as we began using our homemade vacuum seeder. This tool allows us to seed entire flats at once by using vacuum pressure to hold seeds against a Plexiglass plate while the tool is placed over the flat. The vacuum pressure is released and seeds fall into their individual cells.

Plug flats also have disadvantages including:

However, with proper management, plug flats can be a cost-effective method to produce high quality transplants.

Another method that we have been using is soil blocking. With this method, wet media is pressed into forms to create blocks of soil of varying sizes. Seeds are then sown into each block. Soil blocks allow for healthy root production due to an effect called air pruning. As roots reach the edge of the block, they sense the empty space and redirect energy toward other rooting areas. This prevents binding or circling of roots and creates a more ample rooting network. Additionally, soil blocks use pre-wetted compressed media, which oftentimes leads to more media being allotted for an individual seedling, equating to a greater food source for the developing plant. 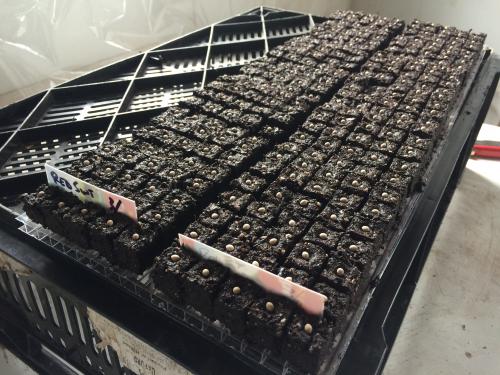 Regardless of the method used, starting seeds indoors can lead to healthy, more mature plants entering the field. When done right, not only can you benefit from an extended season, but a well-conditioned, healthy plant can also protect itself from the harsh conditions it experiences in the field.

Be sure to keep an eye out for part two: Transplant production: Potting mix.

Additional articles in this series: