An unusual insect that was running around on tree trunks caught the eye of several folks last week.  Norm Myers, MSUE Oceana and Wendy Marek, MSUE Mason sent me photographs of these small insects that were brought into their respective county offices.  These rather bizarre bugs are large barklice, commonly known as tree cattle, Cerastipsocus venosus (Psocoptera: Psocidae).  They are called tree cattle because they occur in large colonies that move about in unison, much like a herd of cattle, I guess.

Most species of booklice and barklice are very small, almost microscopic in size.  Tree cattle are huge in comparison, reaching nearly a quarter of an inch long when mature.  Psocids are easily identified by their swollen faces and long antennae.  Tree cattle nymphs appear dark gray with pale yellow banding between abdominal segments.  Adults have shiny black wings that are held tent-like over their abdomens.  The term "lice" as part of the common name of these tree dwellers is quite misleading as these insects are neither parasitic nor louse-like in appearance.  As scavengers, bark cattle perform a valuable function in consuming excess accumulations of fungi, algae, dead bark and other materials that occur on tree trunks and large limbs.  Bark cattle do not eat leaves or the bark of the tree, nor do they damage the tree by boring into the bark and control measures are not recommended for these insects. 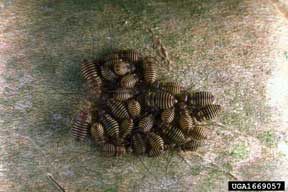 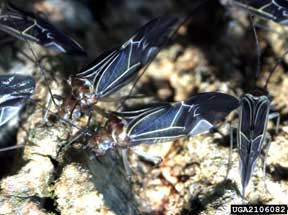