Many parts of mid and southern Michigan continue to miss much needed rain and the effects of the dry conditions are becoming evident on lawns and landscapes. Symptoms range from browning to wilting of plant material. For more information on helping your plants survive dry conditions, see the Michigan State University Extension article “Drought conditions begin to impact Michigan landscape”.

Many people are reporting problems with rose chafers. The rose chafer, Macrodactylus subspinosus (Coleoptera: Scarabaeidae) is a close relative of the Japanese beetle. They are light tan beetle with a darker brown head and long spiny legs. The beetle is about 0.5 inch long. Rose Chafers feed on the leaves of various trees and shrubs with rose, bramble and ornamental fruit trees being among their favorite hosts. They skeletonize the leaves by consuming just the leaf tissue between the veins giving the damaged leaves a characteristic lace-like appearance. The beetle is strongly attracted to plants in bloom, particularly rose and peony. The immature stages, known as white grubs, occur primarily in sandy soil where they feed on the roots of weeds and grasses. The adult beetles emerge in June and live for about a month. Very few animals will eat a rose chafer beetle as the body contains a poison the affects the heart of small, warm-blooded animals. 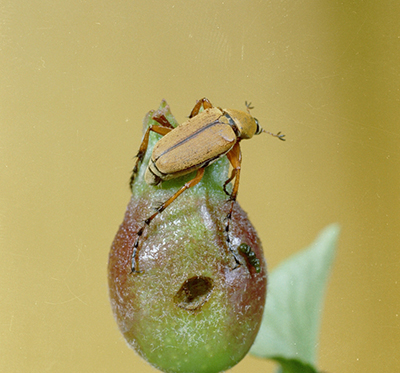 For homeowners, the best products for controlling rose chafer on ornamentals are cyfluthrin (sold as Bayer Advanced Vegetable and Garden Spray), bifenthrin (sold as Ortho Bug B Gon) and carbaryl (sold as Sevin). Sevin sprays occasionally are said to be ineffective.

Be sure to read and follow all instructions on the label before using any pesticide.

Homeowners are calling about leaf drop on maple trees in their yards. This leaf drop is caused by the feeding of maple petiole borer, Caulocampus acericaulis. Petiole borers are small insects called sawflies. A close examination of leaves on the ground will likely show leaves with a blackened, restricted petiole (leaf stems) and with only a small portion of their petiole attached. Though all maples are susceptible to attack from the maple petiole borer, we usually see this on sugar maples. Though the falling leaves are a nuisance, it will not continue for very long and the proportion of leaves damaged by the borers is usually small and does not harm the plant’s health. There is only a single generation of maple petiole borer each year in Michigan, so there is no chance of the problem continuing throughout the summer. 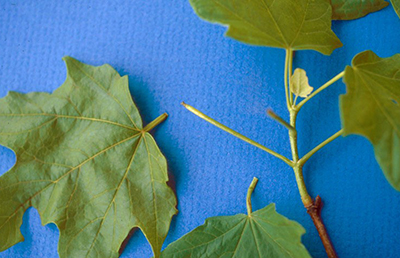 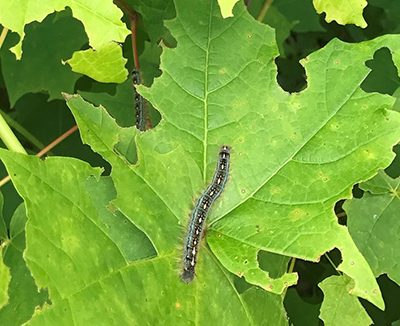 Symptoms of several fungal pathogens are being to found in Christmas tree fields. 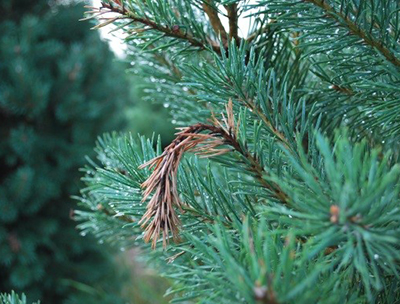 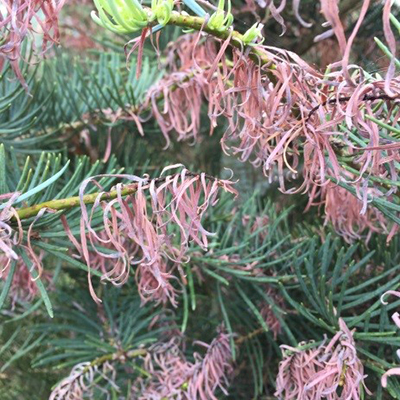 Start scouting for pine tortoise scale (Toumeyella parvicornis) and striped pine scale crawlers (Toumeyella pini). Both of these helmet-shaped scales feed on the woody part of pine shoots and small branches. They excrete amazing amounts of sugary honeydew. Black sooty mold then grows on the honeydew that coats the needles and branches. To control these scales spray a registered insecticide when the pinkish crawlers are hatching out from beneath the female scales. For more information, read the MSU Extension article “Managing pine tortoise scale”. 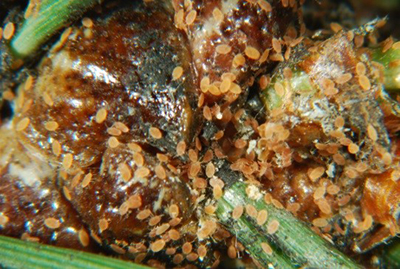 Bat bugs are finding their way into living spaces. Bat bugs are close relatives of the bed bugs and are very similar in appearance. Their presence in homes indicates that bats are also living in the home, most likely in the attic. Bat bugs will bite people if they get hungry enough, however, unlike bed bugs, they cannot reproduce if they only feed on humans. Control measures for the two are quite different, therefore, it is important to be able to tell them apart. This can be accomplished by comparing the length of the hairs on edge of the pronotum (the part right behind the head). In bat bugs, these hairs are longer than the eyes are wide. In bed bugs, these hairs are shorter than the eyes are wide. Easy-peasy, right?

Control measures for bat bugs begin with excluding bats from the premises, then treating bat roosting areas with an insecticide.  For more information on excluding bats, read “Bats and Buildings” from Bat Conservation and Management. 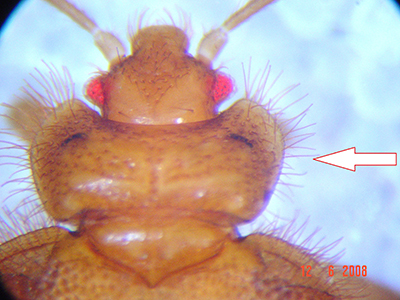 A bat bug showing the very long hairs on the edges of the pronotum. The eyes appear red for easy comparison. Photo by Howard Russell, MSU.

Two spectacular beetles are active now. Several people have contacted MSU Diagnostic Services seeking information on two of our biggest beetles: the eyed elator and the pinching bug aka stag beetle. Both are harmless to people and do not require control measures.

The eyed click beetle, Alaus oculatus (Elateridae: Coleoptera) is one of our largest beetles. Its common name comes from the two large eye-spots on the pronotum. The larvae, which may reach nearly two inches in length, live in moist, decaying stumps and logs where they feed on other insects. 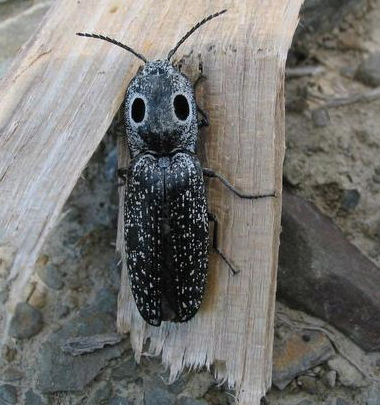 The pinching bug aka stag beetle, Lucanus (Pseudolecanus) capreolus (Coleoptera: Lucanidae) is also among the largest of Michigan’s beetles. The large, fierce mandibles of the male give this species its common name. The beetles are nocturnal and are said to feed on tree sap. They are attracted to lights and often remain nearby on the ground during the day. The larvae live in rotted logs and stumps where they feed on decaying wood. They take two years to develop and pupate in nearby soil. 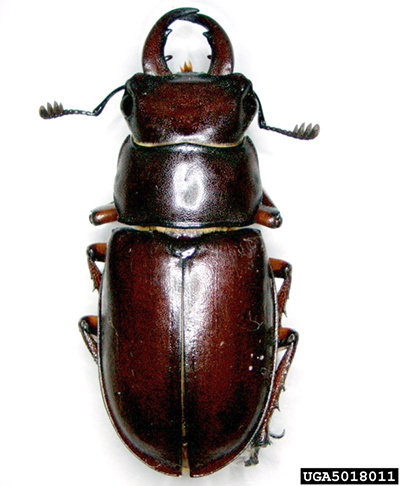 Large numbers of boxelder bug nymphs, Leptocoris trivittatus (Hemiptera: Rhopalidae), are busy roaming about yards and gardens. Several people have called MSU Diagnostic Services asking for information on large numbers of these small, red insects they are seeing in their yards. Boxelder bugs nymphs are bright red and quite nomadic this time of year. During the summer they feed on the flowers and seedpods of female boxelder trees and, to a lesser degree, on silver maple and other trees and shrubs.

Boxelder bugs invade our homes and other structures during fall looking for dry, protected sites in which to spend winter. It is not necessary to control boxelder bug nymphs this early in the summer to keep them from invading homes in the fall. These are just the first generation nymphs. They will mature into adults and lay eggs in July. These eggs develop into the second generation adults that invade our homes in October. 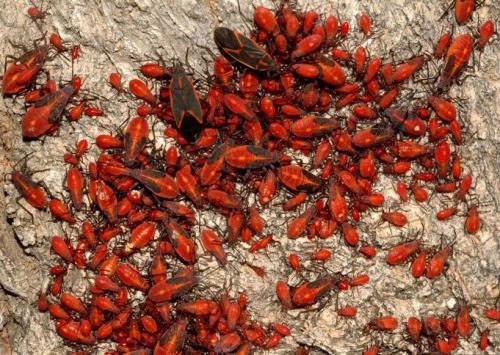