An update on wet conditions, weeds in turf, eastern tent caterpillar and rusts in conifers.

Areas in the south portion of Michigan’s Lower Peninsula have had over 8 inches of rain in the past month. Wet turf conditions have delayed mowing and in some cases we are seeing turf yellowing and dying.

Ground ivy (also known as Creeping Charlie), wild violet and several speedwells (Germander and Creeping) are actively flowering in lawns. The flowering period is the best opportunity to kill them until fall arrives. For more information on controlling flowering weeds, read “What to do with the bevy of broadleaf weeds flowering in lawns” from Michigan State University Extension.

Apple scab in crabapples may be a problem due to the lengthy periods of rain this past month, which provided conditions for apple scab spores to develop.

Pollen cones on conifers are relatively small and often go unnoticed. They are usually clustered near the ends of branches and may be yellow, green or purple, but as they dry out they turn brown. Once they have dried out, they can be mistaken for signs of insects or diseases. 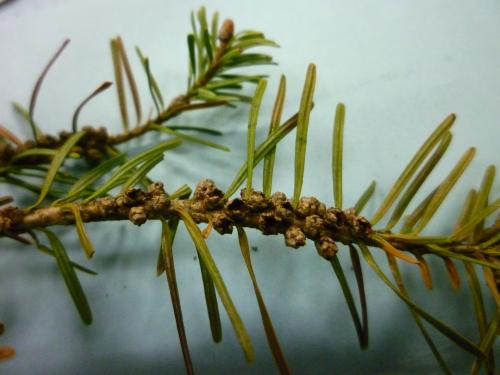 MSU Diagnostic Services has received several samples of boxwood due to concerns about boxwood blight. Boxwood blight has not been found in Michigan. Damage was found to be due to winter injury, boxwood leafminer, boxwood psyllid and Volutella (Volutella buxi).