At least to this point in the year, the weather of 2013 couldn’t be any different than 2012. The season of 2012 was characterized by high temperatures and extended dry conditions. Now that we’re about mid-June, nary has an air conditioner been fired up and most turf managers are just hoping for a couple days of dry weather. Although precipitation is always somewhat scattered and variable from location to location, since Sunday night (June 9), many locations have received between 1 to 3 inches of rain, and this wasn’t following a dry spell. What challenges do the cool weather and abundant precipitation present for managing turf?

This isn’t necessarily a bad thing, but it sure does make it difficult to keep up with mowing. All of the turfgrasses we grow in Michigan are cool-season, which means this weather is absolutely optimal for their growth. Michigan State University Extension often gets questions about mowing turf when it’s wet and whether or not this is detrimental to the turf. Generally, mowing turf when it is wet is not a problem for the turf, but may be a problem for your mower. Some mowers may start to clog up when mowing wet turf, especially if the turf is a little taller than you’d like. Besides issues with the mower clogging, mowing wet turf will dull the mower blade quicker than if you are always mowing dry turf. 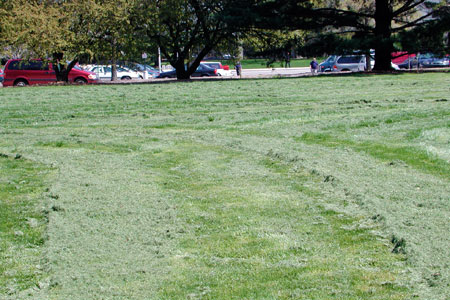 Surging turf growth has made it tough to keep up with mowing.
Photo credit: Kevin Frank, MSU

In addition to mower issues, and certainly more important in the long run, is the potential to compact the soil or cause physical damage to the turf when turning a mower when the soil is wet or saturated. Unfortunately at some point you’re probably not going to have any choice and you’re going to need to mow even if the soil is wet. Just keep this in mind and make sure to schedule a core aeration at some point in the future to alleviate any compaction you may have created by mowing on wet soils. This, of course, is of greater concern for those using riding mowers than for a homeowner using a push-behind walk mower.

Poorly drained turf areas where water has been sitting for several days may be yellow or brown. There are several reasons for the discoloration, but one of the main reasons is impairment of the root system. It doesn’t take long once the soil is saturated for soil oxygen levels to decline and root hairs to begin to die. As the turf’s root system becomes impaired, nutrient extraction and water uptake will be limited.

3. Turfgrass may be slow to respond to fertilizer applications

4. Turfgrass may need additional fertilizer as we move through the summer

At first this may seem completely contradictory to tip No. 3 above, but keep in mind that with the cool temperatures and abundant rain, the turf has been growing like crazy and burning through fertilizer applications. The important consideration is to understand what fertilizer you applied (No. 3 above) and adjust product and application frequency as needed.

As many turf managers already do, let the turf tell you when it’s hungry and don’t be afraid to feed it. A dense, healthy turfgrass stand is more resistant to all types of pest pressure.