Turfgrass ants have started to emerge for mating flights

Last night in Lansing about 7:00 PM, I noticed the air was full of small, dark flying insects. I looked closer at some that had landed on a car and realized they were the turfgrass ant, Lasius neoniger, in the middle of a big mating flight. This happens every year in late August or early September. These are the adult males and queens flying about, mating, and eventually looking for turfgrass for the queens to settle and attempt to begin a new colony. On golf courses, this sometimes causes the superintendents to panic after seeing many small mounds of sand on the greens where the queens tunneled-in. But these queens are rarely successful because of insecticide residues and limited food sources, so there is nothing to worry about. 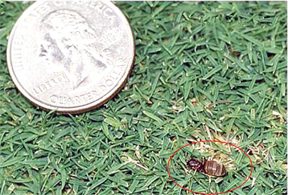