Breakfast on the Farm (BOTF) gives consumers and farm neighbors a firsthand look at modern food production and the farm families who work hard to produce a safe, wholesome food supply for Michigan communities and the world.

The first Breakfast on the Farm for 2011 was held this past weekend at Jef-Len Dairy in Clinton County. The event attracted 2,200 visitors for a home cooked, hearty farm breakfast of pancakes, sausage, dried cherries and fresh strawberries. As good as the breakfast sounds, it was only the warm-up act for the visitors. Families visiting the farm were able to walk through the barns, sit in the tractors, feed the calves, watch cows being milked, enjoy ice cream and learn about the many facets of food production as they toured the farm.

One of the goals of the program is to educate a population that is becoming farther removed from agriculture about how their food is produced. In 2009, the first Michigan BOTF event was held in Clinton County, spearheaded by Michigan State University Extension educator Faith Cullens with the support from many ag-businesses, Clinton County Farm Bureau and many volunteers. This weekend’s event marked the third BOTF to be held in the county. To-date, 6,200 visitors have attended BOTF events in Clinton County alone. Although many are return visitors, new faces were common at this year’s event as well.

Over 200 volunteers, farmers, their children and other agriculture professionals, were on hand early in the morning to make sure the farm was ready for company. When the gates opened at 9:00 AM, hot pancakes and sausages were served, protective booties were put on over street shoes and the self-guided tour began. 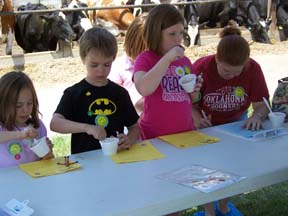 Over 900 children attended this year’s event, many completing a Kids Quiz as they toured the farm. Visitors learned important facts from the exhibits and volunteers, such as every single load of milk leaving the farm is checked for quality and safety. They also learned that one cow eats 100 pounds of feed in just one day. Learning about agriculture is fun at BOTF.

As the flurry of kids and families moved through the farm like a wave, they were greeted by farmers every step of the way. Bringing farmers and the general public together on the farm is key to this program’s success. As BOTF has grown and expanded to a state-wide program, it has held true to its mission: “To give consumers and farm neighbors a firsthand look at modern food production and the farm families who work hard to produce a safe, wholesome food supply for Michigan communities and the world”.

Own up to your role as an employee manager