The unusual Michigan weather in 2010 has resulted in biological development patterns of the obliquebanded leafroller (OBLR) and codling moth (CM) that are more synchronized than normal. Codling moth second-generation adults have started flying in southern parts of the state over the past week. The result is that control timing for second generation codling moth may overlap with the control window for summer OBLR larvae in parts of the state where second to fourth instar larvae can be found in actively growing apple terminals. Where this occurs, there may be an opportunity to get “two birds with one stone” and potentially reduce the overall cost of pest management.

Orchard scouting is the best way to determine if this scenario exists for an individual apple farm and if control action is justified. OBLR larvae are green with brown to black head capsules and are about 25 mm long when fully grown. Often, a scout will detect signs of leafroller activity rather than the actual larva. The name leafroller comes from the larva’s habit of rolling leaves to form a shelter. These feeding sites are most often found at the tips of growing shoots. Larvae also will use silk webbing to attach two leaves or a leaf and fruit together to form a shelter. The presence of webbing is a good clue that leafrollers are around. Also inspect the undersides of leaves within the fruiting canopy, especially where fruit are clustered. Orchards in which less than two percent of the terminals were infested typically do not warrant control action.

Lures in codling moth monitoring traps should have been replaced by now with fresh lures for determining when numbers of adult moths begins to climb and establishing a biofix for the second generation. Particular attention should be paid to parts of the farm bordering orchards with reduced fruit load, as mated female moths will immigrate in from farms with a light crop in search of apples for deposition of their eggs. Monitoring codling moth populations on your farm will enable you to determine whether control sprays are necessary, and if so, to use growing degree days to optimally time those applications for best efficacy.

If control action for both pests is needed, then farmers should select insecticides that are active on both pests and for which the spray timing window will control both pests (Table 1). Note that the optimal timing for codling moth control varies somewhat among compounds. In most cases, targeting younger (first to third instar) OBLR larvae is more effective than waiting till larvae are older (fourth to fifth instars). Materials that are applied to target codling moth eggs (starting at 100 DD) may provide the best overlapping control of OBLR larvae in 2010., Selecting a codling moth targeted compound with a later spray timing may reduce the success of the “two birds with one stone” strategy.

* Compounds known to have wide-spread resistance for either codling moth or OBLR are not included. 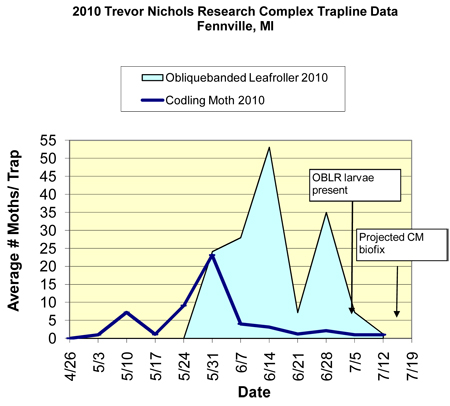