A few days ago I happened to follow our insect collection manager, Gary Parsons, into the Natural Science Building on my way in from the parking lot. He stopped at the doorway as he usually does, to see what critters were still on the wall after being attracted to a porch light during the night. Gary showed me three Asiatic garden beetles, still on the side of the building, and explained that the three beetles are the first official records of Asiatic garden beetle for Lansing. He also found an Oriental beetle in the same place last week, which was also a first record for Lansing. This is an example of how these two beetles have now spread through most of the southern half of the Lower Peninsula.

Asiatic garden beetle is considered a minor pest of turfgrass because the larvae (white grubs) rarely causing visible turf damage. However, the reddish-brown adults can be a problem. They feed at night on a wide variety plants and may strip the leaves off of some annuals and perennials. Oriental beetle is a more serious turf pest, often building-up to damaging levels on golf courses and irrigated turfgrass. We now have one golf course in the Detroit area where Oriental beetle appears to be the most abundant grub. Oriental beetle adults will feed on a variety of trees, shrubs and flowers, but they do not consume nearly as much as Japanese beetles and damage from the adults is unlikely. The grubs are most abundant in moist, sandy soils.

Dr. David Shetlar at Ohio State University has shared some excellent pictures of these beetles. Take a look, so that you can recognize Asiatic garden beetles (still active now) and Oriental beetles (winding down at this time). 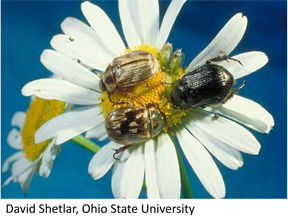 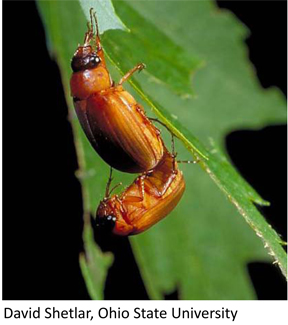 Agriculture in Michigan is amazing!