Hot and dry weather has led to high twospotted spider mite populations in some Michigan hopyards.

Dry conditions and hot temperatures have provided ideal conditions for outbreaks of twospotted spider mites (TSSM) in Michigan Hopyards. Mites are most effectively managed while still at low population levels, so growers are encouraged to scout carefully for mites season-long, starting before damage becomes visible. Good control at this point in the season is critical as cones are present and vulnerable to infestation.

Twospotted spider mites are a significant pest of hops in Michigan and can cause complete economic crop loss when high numbers occur. TSSM feeding decreases the photosynthetic ability of the leaves and causes direct mechanical damage to the hop cones. TSSM feed on the liquid in plant cells eventually causing visible symptoms. Leaves take on a bronzed and white appearance and can defoliate under high pressure conditions. Intense infestations weaken the plant and reduce yield and quality. Infested cones develop a reddish discoloration, do not hold up to the drying process and commonly have lower alpha levels and shorter storage potential. Additionally, the mites themselves act as a contaminant issue for brewers. 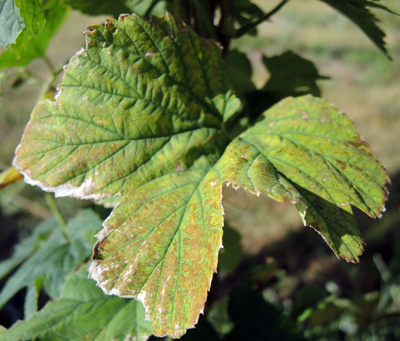 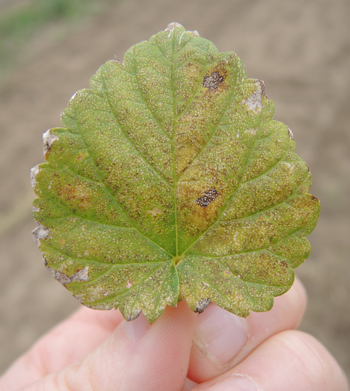 TSSM thrive under hot conditions, with the pace of development increasing until an upper threshold around 100 degrees Fahrenheit is reached. Conversely, cold and wet weather is not conducive to development. TSSM are very small, but can be observed on the underside of leaves using a hand lens. They may be hard to see even using a hand lens; growers can look for movement to help them locate the mites. The eggs look like tiny, clear spheres and are most commonly found in close proximity to adults, webbing, cast skins and larvae. The larvae themselves are small, translucent versions of the adults which begin the season with a distinctly orange hue that changes over to translucent, yellow or green as they feed. Adults also have two dark spots.

When you are observing the underside of leaves, keep an eye out for beneficial, predatory mites that actually feed on the TSSM. Predatory mites are often translucent, larger than TSSM and move at a faster speed across the leaf surface. Predatory mites play an important role in balancing the TSSM population and should be protected when possible.

Michigan State University Extension recommends scouting for mites season-long and making applications only when needed and as recommended by the manufacturer. Some miticides are better positioned early in the season when mite levels are low, others are more effective in situations with high mite populations. Use a hand lens to evaluate two leaves from 20 plants per yard. Thresholds developed in the Pacific Northwest have established that more than two adult mites per leaf in June indicates the need to implement a pest management strategy. By mid-July, the threshold increases to five to 10 mites per leaf. It is unclear at this time how applicable these thresholds are in Michigan. 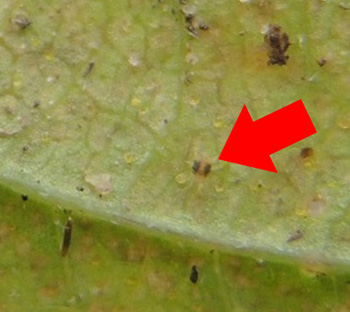 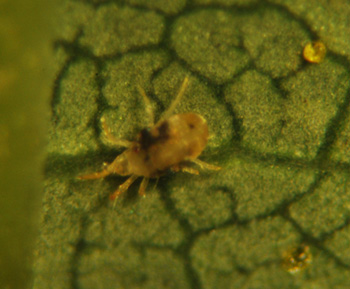 Growers needing to treat for mites at this time are encouraged to avoid applying pyrethroids insecticides which are hard on beneficial mites and have been shown to flare pest mite populations in hop. Refer to page 11 of the “Pesticides Registered for Use on Hops in Michigan 2015” for more information about pesticide toxicity and predatory mites. The table below lists treatment options for producers in Michigan. Always read the label and carefully consider the pre-harvest intervals (PHI).

*Motile forms include mite larvae, nymph and adult stages.
1. Residual control is based on studies in tree fruit and is highly dependent on rate, coverage, weather and mite pressure at the time of application.
2. Rankings represent relative toxicity based on mortality data from studies conducted in tree fruit, hop, mint and grape following direct exposure. 1 = <30% mortality; 2 = 30-79% mortality; 3 = 79-99% mortality; and 4 = >99% mortality.
Modified from a table by John Wise, Larry Gut and Rufus Isaacs, Michigan State University, 2015.

This material is based upon work supported by the National Institute of Food and Agriculture, U.S. Department of Agriculture, under Agreement No. 2013-41534-21068.