Creeping foxtail and meadow foxtail could fill a dual-purpose role in hay and grazing on a farm near Rudyard, Michigan.

You never know what you’ll see when visiting with an innovative farmer. Last week, I saw a couple of “new” forage grasses. Among other unusual and innovative practices on this small grass-finished beef operation were two strips of unfamiliar forage grasses, creeping foxtail (Alopecurus arundinaceus) and meadow foxtail (Alopecurus pratensis). The farmer saw them in Ontario, Canada, and was curious enough to order seed and plant a five-acre strip of each. So far, he is favorably impressed.

Creeping foxtail is well-suited to soils that stay wet through part or all of the growing season, much like reed canary grass, although not as productive. It is not tolerant of drought or close grazing on drier sites. Plants mature significantly earlier than other locally grown forage grasses, including timothy. Some people refer to it as “fast timothy” since the seed head looks somewhat similar to timothy. Creeping foxtail also produces a significant amount of viable seed and spreads fairly aggressively.

An advantage of creeping foxtail over the more common timothy on eastern Upper Peninsula clay soils is that the vigorous regrowth of creeping foxtail after initial haying or grazing, when soil moisture is adequate, allows for better late-summer or fall grazing than timothy or other forage grasses. Creeping foxtail is very palatable for grazing or haying prior to seed head development. It is very competitive with other forage species and often crowds them out, including reed canary grass in wet areas. Seed is small and fluffy and seedling vigor is low for the first six weeks or so after emergence.

Meadow foxtail is similar to creeping foxtail with regard to tolerance of wet soils and good fall regrowth. However, it seems to be stemmier. Meadow foxtail has been increasing its presence in Vermont, according to Dan Hudson, University of Vermont Extension agronomist and former eastern Upper Peninsula resident and Michigan State University Extension field crops educator. Its value as forage is not great due to lower yield and quality than more desirable species, such as orchardgrass. However, Vermont farmers have found meadow foxtail forage quality not as bad as they originally thought. Also, its aggressiveness has resulted in some farmers choosing to live with it instead of spending the time and money to renew forage stands with better grass species. 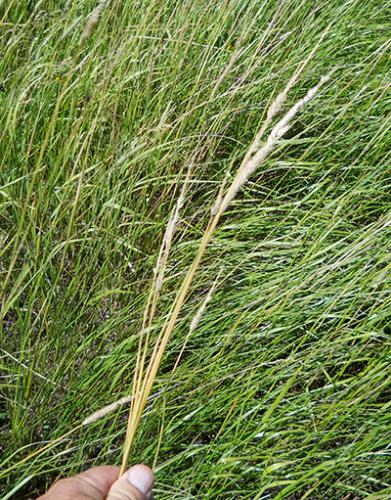 Are creeping or meadow foxtail good choices for grass forage on poorly drained sites in the eastern Upper Peninsula? That question isn’t settled yet, but we’re getting a look at them. Curious and innovative farmers often pave the way for the rest of us by taking a chance with an untried practice like these two grass selections.

Interested in reading up on creeping foxtail or meadow foxtail?

Michigan hay supplies and prices for the spring season