Three additional populations of brown recluse spiders have been confirmed in Michigan since 2011.

The brown recluse spider, Loxosceles reclusa (Sicariidae), is a medically important arachnid whose bite can cause severe necrosis in a small number of cases. However, most recluse bites are minor with no necrosis.

In 2011, I reported the discovery of three isolated populations of brown recluse spiders in Michigan’s Genesee, Hillsdale and Ingham counties. These populations were noteworthy because they are considerably north of the generally accepted native range of the brown recluse (shown below in red with the word “reclusa”). In each case, specimens of the spiders were collected and submitted to Michigan State University Diagnostic Services where they were confirmed to be brown recluse spiders. 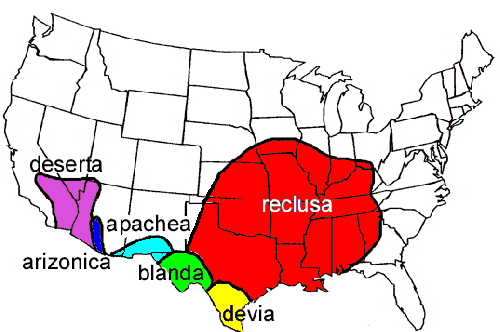 Since the 2011 article was published on the MSU Extension website, three additional populations of brown recluse spiders have been confirmed in Michigan. These new finds are located in Tecumseh in Lenawee County (2015), Ann Arbor in Washtenaw County (2016) and Davison in Genesee County (2017). The Tecumseh population was sharing a home with a human family of five including three young children and two dogs. The homeowner believes the spiders arrived with new kitchen cabinets the previous owner had installed before the family purchased it. The Ann Arbor specimen came from a building on the University of Michigan campus.

The latest find in Davison is noteworthy because the spiders were found this past week in an unheated detached garage. There was no history of anything being stored in the garage that originated from areas located within the native range of the brown recluse. Cold winter temperatures are thought to be a limiting factor in brown recluse spider populations. In the case in Davison, it appears brown recluse spiders survived the winter of 2016-17 in an unheated garage.