Update on The Big Three (not GM, Ford and Chrysler)

Three caterpillars cause the most grief for homeowners in Michigan each spring: eastern tent caterpillar, forest tent caterpillar and gypsy moth. You can tell them apart by their appearance, tent formation, when they are active and the trees they feed on. Look at the chart below and the pictures of each to identify them.

Eastern tent caterpillars are already munching away on wild and ornamental cherries and plums. Look for the silken tents around the base of a branch and the trunk. Tents and caterpillars may be removed by hand and put in soapy water or buried, or you can spray the foliage around the tent with B.t. neem oil, carbaryl, acephate, and just about any insecticide labeled for use on shade trees around the home. 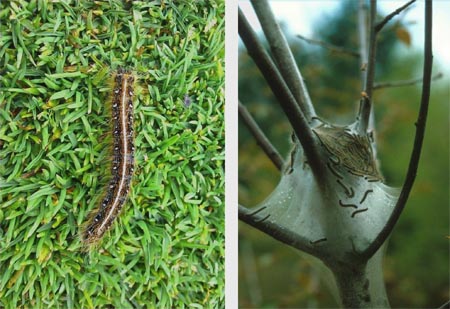 “Lots of folks living in the northwestern Lower Peninsula are asking whether forest tent caterpillar populations will be as heavy as they were last year. It's never a sure bet but, based on our experience with this insect over the years, odds are good that caterpillar numbers will be down across much of the area this spring. Last year's outbreak was heavy enough and extensive enough (over 368,000 acres were defoliated) that insect parasites and other natural enemies of the caterpillar began increasing in numbers, too. One of the most effective natural controls of forest tent caterpillar is Sarcophaga aldrichi, better known as the friendly fly.

Friendly flies resemble house flies, but they are larger, slower and distinctly more bristly. Adult flies are gray in color and are 6 to 12 mm long, the sides of their faces are hairy, on each end of their two antennae is a single and branched bristle, their thoraxes have three black stripes, and their abdomens are checkered. When friendly flies occur in large numbers they, too, can be a nuisance because they drone persistently and often land on people and food. Adults are strong and active fliers and they swarm over everything (people, livestock, lights, light-colored garments and laundry hung out to dry). They don't bite, but they can soil clothes, laundry and food with their regurgitations. Unlike other flies which can be shoo'd away, friendly flies must be brushed away. 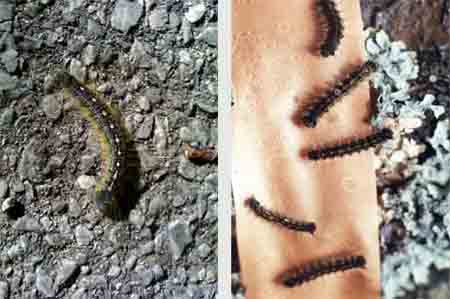 Gypsy moth caterpillars hatch from egg masses in early May, reaching a length of a half-inch long in southern Michigan by mid- to late May. Oak, poplar and birch are their favorite forest trees, but gypsy moth may feed on quite a few other hardwood species as well. The outbreaks are localized and scattered throughout the state, so you could see some gypsy moth damage just about anywhere. Some of the hotspots last year were in the counties around Grand Rapids and Traverse City. The fungal pathogen, Entomophaga maimaiga, was very active last year, and is expected to take a heavy toll on gypsy moth caterpillars again this year if we have rain in late May and June. Because the pathogen is a fungus, its activity depends on rain and moisture. Outbreaks of gypsy moth can last one to three years, causing localized defoliation.