Update on winter injury to landscape trees for 2012-13

Now that spring has finally arrived, we can begin to assess tree problems that may have occurred over the winter. Although it seemed like winter 2012-13 would never end, in terms of landscape tree problems this past winter was remarkably unremarkable.

The coldest low temperature recorded at the MSU Enviro-weather site in East Lansing, Mich., was -6 degrees Fahrenheit on January 22 (Fig. 1). This low temperature was well above our Zone 5b (-15 to -10 F) hardiness zone. In addition, we did not experience a prolonged early season warm-up in 2012-13 as we did in March 2012 when temperatures soared over 70 F for a week. As a result, most of the winter-related issues we’ve encountered this year are fairly typically problems that we would expect to see even after a relatively mild winter. These include animal damage, late frost damage and salt damage. 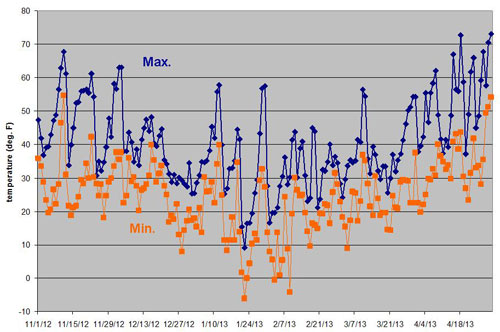 Deer create problems by feeding on many plants, although arborvitaes seem to be their all-time favorite. In addition to feeding, deer frequently damage small trees by making rubs on their trunks. Rabbits and other small mammals also damage trees and shrubs over winter. In some cases, the cause of the damage may not be obvious until closer inspection (Photos 1 and 2). Pruning out the damaged branches is usually the best solution. 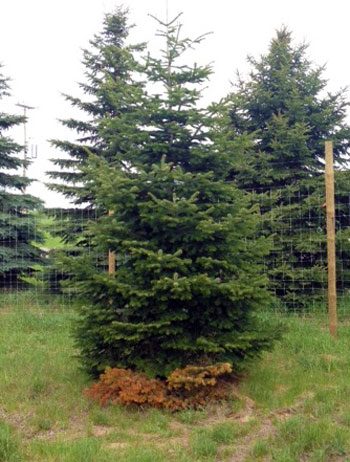 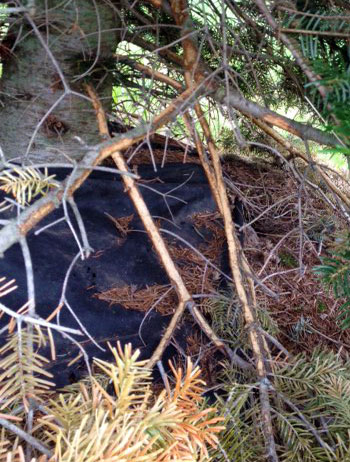 The freeze that occurred on May 13, 2013, resulted in some injury to broadleaved trees and conifers that had recently began to push new growth. Typically, this kind of frost damage is mostly cosmetic and trees will “grow through” the damage (Photo 3). The main concern at this point is conifers that also experienced late frost damage last year. The cumulative effect of repeated from injury may require some remedial pruning in order for trees to maintain their desired form. 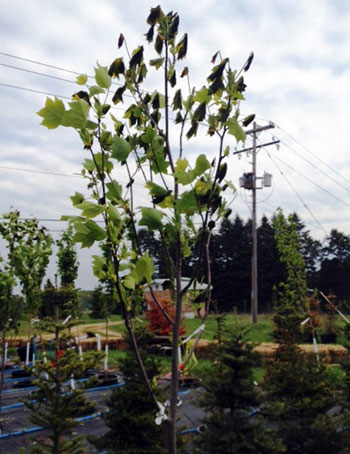 Most locations in Michigan had near-normal or above-normal amounts of snow. Accordingly, road crews were busy applying de-icing salt to keep roadways clear. Sodium chloride, the most commonly used de-icing material, can damage plants especially after chronic exposure. Common signs of salt injury are delayed bud break, incomplete leaf-out and stunted growth, especially on the side of the trees facing the salted roadway (Photo 4). 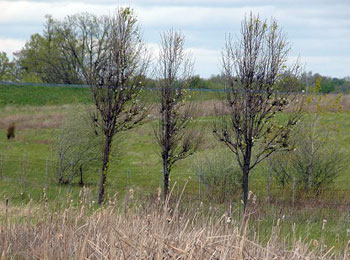 Michigan State University Extension recommends two general strategies for dealing with chronic road salt exposure: selection and protection. Select plants that are relatively tolerant of salt exposure or at least avoid those that are especially sensitive such as eastern white pine. Physical barriers such as burlap-covered snowfence can help protect trees from salt spray.