Glyphosate, a popular herbicide, can cause headaches for potato producers.

Since its introduction in 1974, glyphosate, the active ingredient in Roundup and other generic herbicide products, has been recognized worldwide for its ability to provide low cost, broad spectrum weed control. The development of glyphosate-resistant cropping systems in the 1990s greatly expanded the practical use of glyphosate to include in-season applications to a wide variety of genetically modified crops. Together, these factors have made glyphosate a very popular weed management tool among farmers and homeowners in Michigan.

However, Andy Robinson, potato Extension agronomist for North Dakota State University and University of Minnesota, is working to spread the message that potatoes, an important Michigan crop, can be adversely affected by imprudent use of this herbicide.

According to Robinson, potatoes exposed to glyphosate during the growing season react much the same as targeted weed species. Above ground symptoms can include yellowing or necrosis in young leaves and stunted shoot growth. Glyphosate is also translocated from the leaves of affected plants to developing daughter tubers. Tubers exposed to significant concentrations of glyphosate prior to bulking may develop cracks and malformations that look similar to growth cracks. 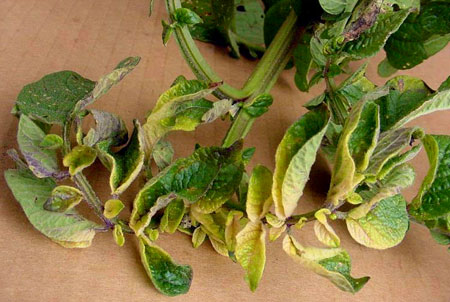 For fresh market or chipping stock, the ultimate result of glyphosate injury is reduced yield and quality. However, the impact of this herbicide on potatoes grown for seed does not end with the close of a growing season. Seed potatoes can store glyphosate residues into the next year. Affected tubers used for seed often exhibit erratic or slow emergence, irregular shoot development and weak or twisting growth once planted. This issue is complicated by the fact that seed crops exposed to low concentrations of glyphosate during late bulking or senescence may not show any obvious signs of injury.

The Michigan potato industry represents a significant contribution to our state’s economy. Last year (2012), growers harvested approximately 45,500 acres of potatoes with a farm gate value over $174.5 million. About 6 percent of this crop is sold as certified seed. Michigan State University Extension encourages both potato growers and glyphosate users that do not produce potatoes to be vigilant in their efforts to minimize the potential impact of glyphosate on Michigan's potato crop.

Common ways that glyphosate comes into contact with potato plants include overspray or drift from applications in areas adjacent to potato fields, spray tank contamination and delayed preemergent applications to potato ground. Glyphosate applicators can help protect Michigan potatoes by being aware of where potatoes, particularly seed potatoes, are being produced and adhering to common best practices for spray application.

Checking sprayer set-up and environmental conditions such as wind speed and direction before applying glyphosate near potato fields can help avoid costly mistakes. “Spraying near a potato field should occur only when wind speeds are between 3 and 10 miles per hour and the wind is blowing away from sensitive areas,” Robinson noted. Thoroughly cleaning and rinsing spray tanks before they are used in potatoes is also critically important.

If a potato grower suspects their crop has been affected by glyphosate, they should carefully document all symptoms with photographs, plant counts or maps and promptly contact all parties involved, including insurance companies. Producers may also want to consider submitting symptomatic leaves or tubers to a lab for residue testing, such as the Pacific Agricultural Laboratory in Portland, Ore.

For more information regarding the impact of glyphosate on potatoes, MSU Extension suggests viewing a webinar developed by Robinson.