Since both low and high crop densities reduce yield and total revenue, it is important to calibrate the planter for optimum density.

With the return of warm weather, the planting of warm season vegetables like cucumber and squash will be at full swing over the next couple of days. During these busy times, it is important to remember that the planting density used may have significant impacts not only on yield, but also on net revenue. Planting densities that are either too low or too high may result in economic losses.

When the planting density is too low, each individual plant may perform at its maximum capacity, but there are not enough plants as a whole to reach the optimum yield. Therefore, total yield of the crop becomes a limiting factor. Also, when there is too much space left between plants, weed growth is promoted, which could increase weeding costs.

Impact of a high planting density

If the planting density is too high, plants may compete against each other, known as intra-specific competition. Under those conditions, the performance of individual plants becomes a limiting factor for maximum crop yield.

Calibrate your seeder each time of use, especially if you change seed batches or the seeder has been sitting around for a long time or has been moved.

Remember that for some crops seed size may vary from batch to batch and smaller seed could increase your planting density (unless you are using a planter with high accuracy in seed singulation).

If you change your row spacing, remember to recalibrate the seeder for the target plant density. For example, reducing row spacing from 30 inches to 24 inches without recalibrating the seeder will increase the planting density by 25 percent.

Using planting density to maximize economic value of the crop: The case of pickling cucumber

Profitability of pickling cucumber (as is the case for many other crops) is not just a function of total fruit weight, but is also dependent on seed cost and fruit selling price. Therefore, seed cost should be included in the analyses of studies designed to identify optimum pickling cucumber densities. With an arbitrary 5 percent margin of error, a study conducted under our growing conditions showed that optimum economic value is obtained with densities between 72,000 and 120,000 plants per acre (Figure 1). Optimum density for highest economic value varies depending on seed cost and cucumber selling price. The higher the seed cost, the lower the optimum density. Also, the lower the selling price, the lower the optimum density. Other factors that should be taken into account include cultivars, growing conditions and timing of harvest. 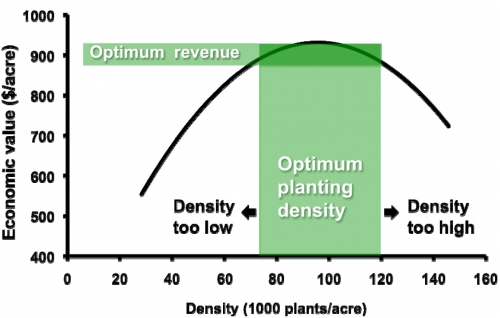 Please note this is not the net profit to the grower because the cost of the seed is the only input used in the calculation. In our economic analysis, we used an average cost of $1.65 per thousand seeds and a selling price of $3.25 per bushel for grade 2 and 3 (marketable grades for machine-harvested cucumbers). Economic value was obtained by multiplying yield by selling price and subtracting seed cost.

Dr .Ngouajio’s work is funded in part by MSU’s AgBioResearch.