The increasing number of consumers who want to know where their food is coming from has created an opportunity for dairy producers to successfully market farmstead cheese. Consumers interested in supporting farmers and the local economy are attracted to food products made on the farm. Farmstead cheese also appeals to the growing number of consumers interested in natural food products. The Hartman Group, a firm that researches consumer behavior and food preferences, highlights farmstead cheese in their report Looking Forward in Food Culture 2012.

While there are no government regulations surrounding the use of the term “farmstead” on a label, the American Cheese Society defines farmstead cheese as cheese that is made with milk from the farmer's own herd or flock, on the farm where the animals are raised. The definition also states that milk used in the production of farmstead cheeses may not be obtained from any outside source. Farmstead cheeses may be made from all types of milk and may include various flavorings.

Farmstead cheeses can be seen throughout the pages of Culture, a new magazine introduced in 2011 that focuses all of its content on cheese. The American Cheese Society sponsored a farmstead division in the cheese competition held in conjunction with its annual conference. Farmstead cheese operations have been quite prevalent in Wisconsin and Vermont and are now taking hold in Michigan.

In Michigan, cheese must be made in a Michigan Department of Agriculture and Rural Development (MDARD) licensed facility from milk produced in a licensed Grade A Dairy. Pasteurized milk must be used for production of fresh cheese like chevre. Raw milk may be used to make cheese as long as the cheese is aged at least 60 days before being sold. Dairy producers who fulfill all of the regulatory requirements may market farmstead cheese.

Rusty Plummer of Hickory Knoll Farms Creamery, in Onondaga, Mich. has been perfecting the cheesemaking craft for years and began sales of both fresh and aged cheeses from his da 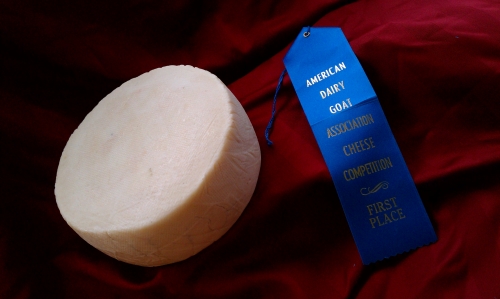 iry goat milk in 2011. He sells his farmstead cheeses through farmers markets, specialty stores and to restaurants. Plummer states, “Consumers buy my cheese because it is a quality product, it is a local product and it is different than they can get anywhere else.” Plummer’s Tomme de Charbonnel, a French-style Tomme cheese, won best in class at the American Dairy Goat Association Annual Convention National Cheese Contest last fall.

Ben Tirrell, who owns and operates Tirrell Farmstead Specialties in Charlotte, Mich., has developed the genetics in his sheep flock specifically for cheese production. Several years ago he began introducing East Friesian sheep into the flock which is a breed known for their tremendous milk production. He produces a variety of farmstead cheeses from the sheep milk that are sold at farmers markets, specialty stores and his on-farm store. Customers who purchase the cheese at the farm store can actually see the sheep that produce the milk for the cheese and view the cheese production area through an observation window in the store. Tirrell also produces hand-crafted artisan cheese from locally produced cow’s milk.

Foods for Living in East Lansing, Mich. carries the Tirrell Farmstead cheese and offers a variety of farmstead and artisan cheeses to meet the demands of their customers. Pam Gower, deli manager at the store said, “We want to provide superior customer service and are responding to customer interest in these types of foods. Our customers want locally produced, minimally processed foods. The farmstead cheese meets that criteria and the taste is delicious.”

Dairy producers who are interested in developing value-added products like farmstead cheese may contact the Michigan State Univerisity (MSU) Product Center for assistance. Innovation counselors working across the state can provide assistance in business planning, marketing and navigating the regulatory maze in launching a value-added farm product. MSU Extension dairy educators may also assist producers in adding value to their farm operations.