Low-disturbance tillage can be a valuable tool in the toolbox for field crop farmers.

Changes in equipment and seed technology in recent years have helped in the transition to no-till and low-disturbance tillage for corn and soybean production. Genetically engineered (GE) crops provide above-ground protection against European corn borers and other major pests, below-ground protection against corn root worms and tolerance to broad spectrum herbicides that have improved weed control. Despite these technological and agronomic advances, growers are concerned about an emerging problem: excessive corn residue that is slow to breakdown and decompose. Excessive corn residue can interfere with drill and planter performance and lead to poor and uneven germination and emergence, delayed dry down and reduced yield and profitability.

The demands of no-till cropping and managing high-yielding corn residue have led to a new generation of tillage equipment that use coulters or narrowly spaced, shallowly concave disks rather than conventional tillage shanks. These “vertical” tillage tools fracture and loosen the top 2-3 inches of soil, level wheel tracks, improve infiltration and reduce runoff. They do not bury much crop residue, but they cut and shatter it into smaller pieces for even distribution and better contact with the soil.

Vertical tillage tools vary in their ability to till and loosen the soil and cut and size corn residues. On fine-textured soils that respond favorably to tillage, aggressive, fluted coulters on toolbars with gang angles as great as 18 degrees size crop residues and increase soil loosening, lateral movement and residue coverage. When sizing corn residue is the primary goal, less aggressive coulters and toolbars with a zero degree gang angle and a rolling or spring-tine harrow can distribute residue evenly while reducing tillage intensity.

Videos showing the implements, soil and residue conditions can be accessed with the following links: 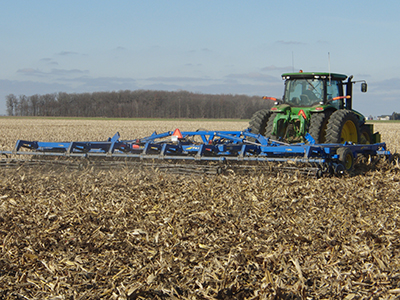 Fall tillage with the Landoll 7450.

In most cases, spring tillage was on the day before or on the day of planting. Soils ranged from sandy-loams to loams and clay-loams. The first stand counts were within seven to 10 days of planting and subsequent counts were at one-week intervals until the plant population leveled off.

Based on results of 10 on-farm field trials with a range of tillage implements, tillage of corn residue in the spring or fall generally led to more rapid soybean emergence, but did not increase final plant population or soybean yield.

Although we were unable to detect an increase in soybean yields due to fall or spring tillage, many corn and soybean growers report improved planting when using a vertical tillage tool to create a uniform, warm and dry seedbed across the field. Consistent soil conditions aid in timely planting, even emergence and dry-down, and can maintain top planter performance at a faster travel speed. Vertical tillage can also help reduce nutrient loss following manure or fertilizer application compared to surface broadcasting alone by improving infiltration and reducing runoff.

We did not measure corn emergence and yield, and corn may be more responsive to low-disturbance tillage than soybeans. Vertical tillage can be a valuable tool to have in the grower’s toolbox.

Funding for this work was provided by the Corn Marketing Program of Michigan and the Michigan Soybean Promotion Committee. We greatly appreciate the support and cooperation of the growers who helped with this work: John Crumbaugh, Lou Faivor, Jay Ferguson, Jeff Sandborn, Lee Thelen and Eric Voisinet.