For several years we’ve been keeping a watchful eye on the viburnum leaf beetle, which heavily feeds on viburnums in native and landscape settings. We’ve monitored its movement across northeast states and into Ohio, watching it get closer and closer to Michigan and hoping we wouldn’t have yet another invasive pest.

Larvae hatch from overwintering eggs in May. The emerging larvae are greenish-yellow and feed gregariously on the underside of tender, newly expanding viburnum leaves skeletonizing the foliage. Damage usually starts on lower leaves with only the midribs and major veins left intact. As the larvae mature, they grow to about 1/3 of an inch long, darken and develop a series of dark spots. 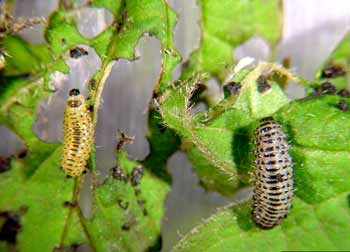 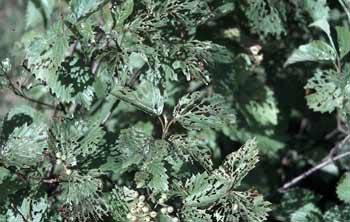 Mature larvae migrate to the soil to pupate. Adults emerge from July-September and return to feed on foliage. Adult feeding damage consists of irregular circular holes and severe feeding can nearly defoliate shrubs once again. When disturbed, the beetles will fly away or drop to the ground. Adult viburnum leaf beetles are 1/4 to 1/3 inch long and are generally brownish. 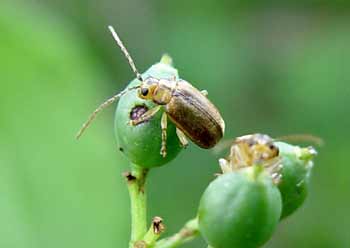 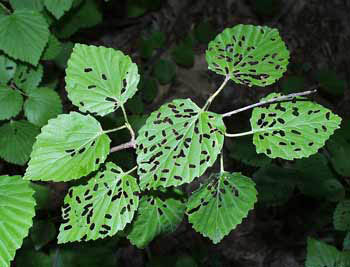 Adults begin laying eggs in late June to mid-July and continue laying eggs as late as October, until the first killing frost. They prepare laying sites by chewing small holes into a small branch or twig, usually on the current season's growth. The females lay their eggs into the hole and seal the hole with a lid or "cap" made of chewed bark and excrement held together by a special cement that they make. 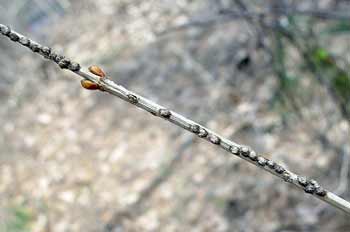 Heavy infestations by viburnum leaf beetle can defoliate shrubs, cause dieback and eventually kill plants. Valued plantings of the European cranberrybush viburnum can be severely damaged by larval and adult feeding. Shrubs repeatedly defoliated over a period of two to three years are likely to die.

Selecting resistant species, pruning out egg masses, encouraging beneficials and using pest barriers around the base of the shrubs are effective for most home landscapes. When necessary, a number of pesticides are effective in controlling viburnum leaf beetle.

Automatic hitches make it easier to connect to implements