Wet weather and cooler temperatures have prevailed over the past two weeks, and we are having a very similar growing season to 2013 and 2014. Berry development and vine growth have been steady, and juice grape canopies in particular are becoming dense. Disease and insect development have also been progressing normally. Juice grape vineyards are approaching berry touch with berries sizing nicely.

Rose chafer are finished in southwest Michigan and considerable feeding damage on clusters can be seen at some sites from rose chafer feeding on flower clusters. Japanese beetles have emerged, but are still few in number at our scouting sites. Grape leafhoppers remain below the level of concern, but growers and scouts should keep an eye for these insects on the underside of leaves. Michigan State University Extension also advises growers to be on the lookout for potato leafhoppers on younger leaves. Low numbers of young grape berry moth larvae have been found in berries, indicating some late activity of first generation females. The second flight of grape berry moth males is beginning. Second generation female activity should increase soon and we will see egglaying begin in the next week across much of southwest Michigan, which is the ideal timing for grape berry moth sprays.

Growing degree day (GDD) totals are about the same as the totals on this date last year, and that puts us about even with 2013 as well. However, we are still about 100 GDD50 or four to five days behind the five-year average for this date.

Based on our observations at MSU Vineyard IPM Project farms, we set the estimated date of wild grape bloom as May 26 for vineyards in Berrien County and May 28 for those in Van Buren County. It is best to use the wild grape bloom date on your own farm to make the most accurate predictions, but the dates given in the table below can be used for the MSU Enviro-weather grape berry moth model if there is no date recorded for your vineyard. Either apply ingestion poisons such as Altacor, Belt or Intrepid at the start of egglaying (810 GDD47 after wild grape bloom), or apply contact poisons such as Sevin, Imidan, Danitol or Mustang Max 100 GDD47 (four to five days) later.

Black rot on clusters has been observed in some commercial vineyards; this is expected to be worse in areas with long, wet periods during bloom and where systemic materials were not applied frequently during these wet periods. Some downy mildew fruit infections are developing in vulnerable varieties and unsprayed vineyards, but neither downy nor powdery fruit infections appeared in the commercial vineyards we scout. 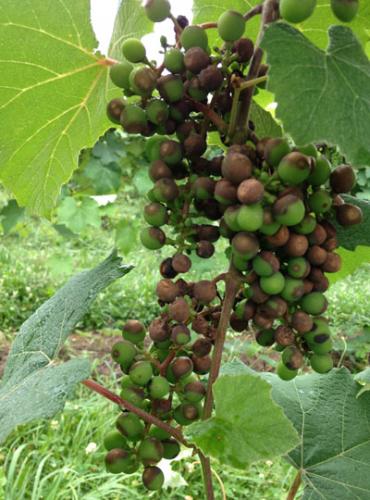 Severe cluster infection of black rot. Infections will develop on fruit that was unprotected during bloom or early fruit development.

The fruit of juice grapes in Berrien and Van Buren counties are sizing well and therefore becoming resistant to most fruit infections, particularly powdery mildew and downy mildew. The first black rot lesions on fruit were found in a commercial vineyard, though not in the scouted vineyards in this project, which is quite early but not surprising with all the rain we’ve had. The thing to remember is that infections showing up now may have occurred two to three weeks ago as the black rot fungus “hangs out” for a while without showing symptoms. This is quite tricky, but indicates a fungicide spray was missed or insufficient at that time. You can look at the MSU Enviro-weather grape black rot model to determine when infection periods occurred in your area. Don’t be surprised to see more black rot show up on the fruit over the next month or so. While we can’t cure rotting berries, it may still be helpful to apply a fungicide to protect berries from late black rot infections, especially if black rot leaf spots are present.

The fruit of vulnerable varieties of wine grapes are still very susceptible to infections by the main grape diseases. Wine grape growers should continue to protect clusters from powdery mildew, downy mildew, black rot and Phomopsis. Botrytis fungicides are good to get on before bunch closure in tight-clustered varieties that are susceptible to bunch rot. The importance of protecting young fruit in hybrid wine grapes depends a great deal on susceptibility of the variety being grown. Check pages 188-190 of the “2015 Michigan Fruit Management Guide” for varietal susceptibility to fungal diseases.

Concord is at early berry touch and berry diameters range from 0.75 to 1 centimeter. Hybrid and vinifera berries are in the bud burst to buckshot range in size.

Eastern grape leafhoppers and potato leafhoppers were not seen during scouting, but growers and scouts should continue to look for these pests on the foliage. Rose chafers were not observed, but Japanese beetles are emerging at the farms we scouted this week. Numbers of this pest are low, and no treatment is required at this time. Phomopsis and black rot leaf lesions in commercial Concord and Vignoles vineyards seen during scouting June 29 (less than 5 percent of leaves infected). Black rot on infected berries was also observed.

As of June 29, juice grape clusters were at berry touch with berry diameters 0.75 to 1 centimeter. Hybrid and vinifera berries are sizing well after bloom and the largest berries are approaching pea-size. The number of grape berry moth males caught in traps was low (zero to eight moths per trap), and we are at the start of second flight in this region. Grape berry moth damage in these vineyards was low and ranged from 7 to 15 percent of clusters with damage. The MSU Enviro-weather grape berry moth model predicts second generation females will begin laying eggs early next week (see table above). In vineyards with a history of high pressure, growers should check this model often to determine when egglaying will begin in their area. Low numbers of grape leafhoppers were seen during scouting June 22, but numbers were well below the need for action, and no leafhoppers or Japanese beetles were observed June 29.

Neither downy mildew nor powdery mildew symptoms were seen on leaves or clusters in Niagara or Chancellor. Leaves with Phomopsis and black rot symptoms were seen in Chancellor and Niagara, but these infections were low (less than 5 percent of leaves infected) and appear to be held in check by post-bloom fungicide applications.

This report is supported by the Michigan Grape and Wine Industry Council and the National Grape Cooperative.