Under current environmental conditions, symptoms of virus in hopyards have become visible.

Hop growers around Michigan have been noticing leaf mottling and patterned discoloration caused by a complex of viruses that affect hops in North America. Hop latent virus, American hop latent virus and hop mosaic virus (known as the carlavirus complex), as well as apple mosaic virus and hop stunt viroid have all been confirmed in Michigan. Symptoms of virus can appear similar to damage caused by potato leafhoppers, twospotted spider mites and even downy mildew. The similarity between symptoms makes field diagnosis of viruses very difficult. Growers can submit samples for testing to Washington State University.

The following descriptions of the viruses and viroids are excerpted from the “Field Guide for Integrated Pest Management in Hops.”

Hop latent virus and American hop latent virus do not cause visually obvious symptoms on any commercial hop varieties. Of the three carlaviruses, hop mosaic virus is the most likely to cause symptoms and crop damage. On sensitive varieties, chlorotic mosaic mottling can develop between major leaf veins. Severely affected plants may establish poorly when planted, have weak bine growth, and often fail to attach to the string.

Carlaviruses are transmitted largely through mechanical means. Propagation and distribution of virus-infected plants is the primary mode through which they are spread long distances. Root grafting and mechanical transmission are thought to contribute to localized spread. Carlaviruses are also transmitted in a non-persistent manner by aphids. This means that when an aphid feeds on an infected plant, it can acquire the virus and immediately transmit it to the next host plant on which it feeds.

Transmission to subsequent plants is either very inefficient or does not occur at all. All three carlaviruses are transmitted by hop aphids (Phorodon humuli). Hop mosaic virus and hop latent virus are also transmitted by potato aphids (Macrosiphum euphorbiae) and green peach aphids (Myzus persicae). Carlaviruses typically have narrow host ranges, therefore the only suitable hosts likely to be near hopyards are other hop plants. Over the life of a hop planting, a high percentage of plants in a particular hopyard may become infected if viruses are present.

Using certified virus-free planting stock is the most practical method of limiting any virus disease. Application of insecticides to control aphids is inefficient for limiting the introduction of virus since the virus will be transmitted before the viruliferous aphids are killed. However, reducing aphid populations can reduce the rate of secondary transmission within a hopyard. 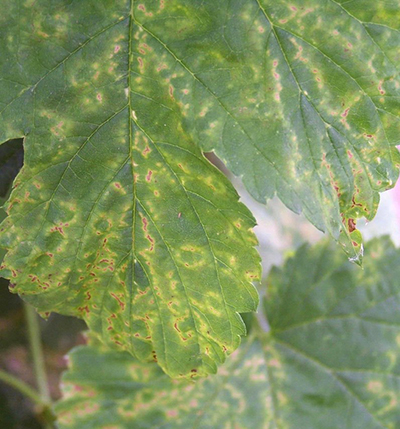 Apple mosaic virus induces chlorotic rings or arcs that can become necrotic. Frequently, these merge to create oak leaf-line patterns on leaves. The severity of symptoms is dramatically affected by environmental conditions. Symptoms are usually most severe when a period of cool weather with temperatures below 80 degrees Fahrenheit is followed by higher temperatures. Plants can be infected for several seasons without disease expression until appropriate environmental conditions occur. Under conditions where severe symptoms are expressed, cone and alpha-acids yield can be reduced up to 50 percent. A mixed infection of apple mosaic virus and hop mosaic virus may result in enhanced disease severity and crop damage.

Propagation of apple mosaic virus-infected plants is the primary mode of transmission, although mechanical transmission in the hopyard and root grafting appear to be significant factors in the local spread of the virus. Since apple mosaic virus is not expressed every growing season, infected plants may be selected inadvertently for propagation and spread the virus to other hopyards.

Hop stunt viroid is a sub-viral pathogen that causes a serious disease of cultivated hop. It spread throughout Japan in the 1950s and 1960s. Presence of the viroid in North American-grown hop plants was confirmed in 2004. The disease has been reported in hop-growing regions of Japan, Europe and North America. Hop stunt viroid can reduce alpha-acids yield by as much as 60 to 80 percent. 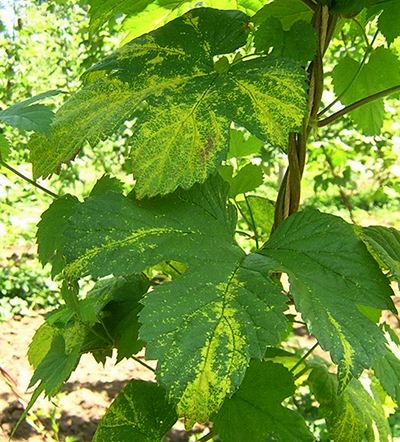 The severity of symptoms caused by hop stunt viroid is dependent on the hop variety and weather. Visible symptoms of infection may take three to five growing seasons to appear after initial infection of mature plants. This long latent period before the appearance of discernible symptoms frequently leads to the propagation and distribution of infected planting material. Early-season growth of infected bines is delayed and foliage is generally pale relative to healthy bines.

During active growth, the length of the internodes of infected bines is reduced by as much as two-thirds compared to healthy bines. The degree of stunting is temperature-dependent, with more severe stunting occurring in warmer growing regions or seasons. As bines mature, the development of lateral branches is inhibited. The cones borne on the sparse and shortened lateral branches are smaller and development is delayed compared to cones on healthy plants. The development of yellow-green foliage continues to appear at the base of infected bines throughout the season. The response of different varieties to infection is not well known, but on some sensitive varieties yellow speckling appears along the major leaf veins. This may be the result of a mixed infection of hop stunt viroid and a carlavirus.

The only known mechanisms of transmission are through propagation of infected plants and mechanical transmission. There is no evidence that hop stunt viroid is transmitted through hop seeds or via an arthropod vector. Hop stunt viroid has a greater tendency to move along rows rather than across rows, suggesting that transmission by bines rubbing together on a wire is inefficient. Observation suggests that agricultural operations are the primary mode of viroid transmission once an infection has become established in a planting. Hop stunt viroid is readily transmitted mechanically by workers, cutting tools and equipment during cultural activities such as pruning, thinning and mechanical leaf stripping. Mechanical transmission is most likely to occur in the spring when sap pressure is high and abundant contaminated sap is forced from cut or wounded surfaces, contaminating wound sites on other plants. Hop stunt viroid can remain infectious in dry plant debris in the field for three months, but it is unknown if this contributes substantially to transmission of the viroid.

Since propagation is the major route of hop stunt viroid spread, using planting material certified free of this pathogen is the best means of limiting its distribution. Hop stunt viroid spreads by mechanical means and presumably also by root grafting. If a small number of plants are infected, they should be removed promptly, with care to remove as much root tissue as possible. Because of the latent period, removing only symptomatic plants may allow nearby infected plants to remain in the hopyard. Several plants adjacent to symptomatic plants should also be removed. If possible, plants to be removed should be treated in late summer with a systemic herbicide, such as glyphosate, to kill roots.

If possible, sites should be allowed to lay fallow for one season so that remaining living roots will produce shoots that can be treated with herbicide. Soil fumigation may also be helpful in killing infected root pieces that remain after rogueing if larger areas are affected. Precautions should be employed to limit spread within a hopyard and between yards.

Using contact herbicide for spring pruning is preferable to using mechanical mowers that may transmit the viroid. Similarly, removing basal vegetation later in the season by chemical rather than mechanical means also reduces the risk of transmission. Thorough washing of farm equipment to remove plant residue and sap may help reduce the likelihood of transmission to new fields. Treating knives and cutting tools with a disinfectant solution for 10 minutes may reduce transmission. Many products including bleach (sodium hypochlorite), calcium hypochlorite and hydrogen peroxide have been suggested, but results are inconsistent.