Wait – that’s NOT a Seagull?

What most people call seagulls are really many different species of the same bird family.

The last time you went to the beach you probably had no trouble finding some wildlife in the form of a noisy flock of seagulls. But was that truly a seagull trying to make off with your lunch? Ask a bird researcher or check in a bird book and you’ll soon find there is no such thing as a seagull. What most people refer to as seagulls are actually birds in the scientifically classified family Laridae. Look in any North American bird guide and you’ll see this group listed as the “gull and tern” family with more than 35 species in it.

Most species of gulls and terns are found over open water or on coastal habitats such as beaches and shorelines, which is how they earned the generic name “sea” gulls. However, these birds can be found in a variety of habitats from wetlands and ponds to farm fields and parking lots.

The Great Lakes are rich in diversity of gulls and terns. The large number of rocky islands and shoals along with large coastal wetland areas provide great nesting and feeding habitat for these species. According to the Michigan Breeding Bird Atlas, three species of gulls and four species of terns can be found breeding in Michigan. Approximately a dozen additional species have been documented 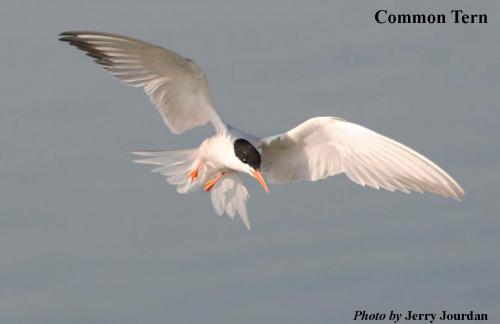 migrating through or spending the winter months along our Great Lakes shorelines.

Meet a few species from the gull and tern family who you might encounter along Michigan’s waterways:

This biodiversity (or wide variety of life) in our coastal bird community contributes to the health of our Great Lakes ecosystems. Many gulls are scavengers and help “clean up” dead or sick animals and fish. Gulls and terns also act as a vital part of the food web. They contribute socially and economically through the  many people who enjoy a day viewing gulls – whether it’s children enjoying watching their antics on the beach or an ardent birder spending time and money traveling to a flock to pick through and identify each species.

So take a closer look the next time you enjoy a stroll along our Great Lakes shorelines. You may be surprised in the number and diversity of gulls, terns, and other coastal birds you see.

Several coastal birding trails across Michigan can help guide your next birding adventure, including:

Citizen science forums such as iNaturalist or the Cornell Lab of Ornithology’s eBird offer an added opportunity to both document your sightings and gain help in identifying species. By submitting your sightings to these sites you are also helping out as a citizen scientist, documenting biodiversity in our Great Lakes coastal environments.